At home in Tabriz

Posted on December 12, 2012 by briansworldtour 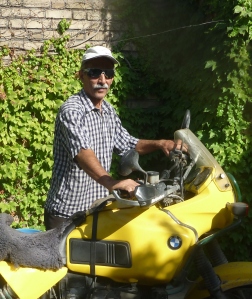 Sam, my very generous host and new-found friend in Tabriz

As I sat on the footpath trying to cool down an elderly, yet surprisingly spritely, gentleman on a modern mountain bike stopped to ask, in very good English, if I was OK. I replied that everything was fine, I just needed a break. After the usual chit-chat I told him I was looking for the Kosar Hotel.  Semsary, or Sam as he preferred to be called, gave me some simple directions to the hotel and began to pedal away.

After riding about 50 metres Sam returned and said he was heading home for lunch, and then asked if I would like to join him. With nothing better to do I gratefully accepted his offer. We headed off in the direction of Baghmisheh, a modest residential district on the eastern outskirts of Tabriz several kilometres away. As we wound our way through the chaotic traffic Sam would occasionally catch a tow from my panniers when we rode up some of the steeper hills.  Sam’s wife, Agdaz, had prepared an enormous lunch – enough for six people not just the three present. After lunch, Sam and I swapped life stories – his far more dramatic than mine.

Sam was in his sixties and a retired officer from the Iranian Air Force. But in his youth, he had served his National Service in the Iranian Army during the Iran/Iraq War where he had seen several of his closest friends killed in action. This was to affect him deeply.

Thanks to his regimen of daily cycling, swimming laps three times a week and light gym work at home, Sam was incredibly fit for his age.  He had little interest in motorcycling but his enduring passion was mountain climbing. Sam had climbed all of the major peaks in Iran – most of them well over 4500m. But the one climb that he was most proud of was scaling Kilimanjaro in Tanzania. Not because of its difficulty but because he had led an expedition of disabled Iranian war veterans, sadly both young and old, including several amputees with prosthetic limbs and one who was completely blind. In his retirement, Sam had made it his own personal mission to provide some form of rehabilitation for disabled war veterans.

It made my able-bodied travel seem quite unremarkable.

As lunchtime meandered into late afternoon I made to bid my new-found friend a fond farewell but Sam would have nothing of it. He insisted that the traffic to the hotel in the city centre would be very dangerous at that time of day and that I should stay the night. I began to politely decline his offer but was really very relieved when Sam became more insistent and I didn’t have to go searching for the Kosar in peak hour traffic.

Sam and Agdaz’s home was quite roomy and split over three floors. They had three adult children who were all away with either work or study. The entire second floor was unoccupied and given over for my personal use including the ensuite. I don’t know what the Kosar Hotel was like but I doubt it could offer the same hospitality.

Unbeknownst to me, as well as becoming my host, Sam had immediately appointed himself my personal tour guide, interpreter and historian. In the time it took me to have a shower and put on some clean clothes Sam had come up with a plan for the rest of the afternoon and into the evening as well.

END_OF_DOCUMENT_TOKEN_TO_BE_REPLACED

Posted on December 9, 2012 by briansworldtour

After escaping Tehran, I headed for Qazvin, the halfway point on the road to Zanjan. Qazvin is one of Iran’s most historic cities. It was first founded during the Sassanian kingdom in the 3rd century AD but rose to fame as the Persian capital  under the Saffavid shahs in the 16th century, before eventually losing out to Esfahan. Originally I was going to spend a couple of days in Qazvin as it is also the main gateway for visiting the famous 12th century castles of the Assassins in the Alamut valley. But like so much of my time in Iran so far, my plans changed on a daily basis. The only thing I knew for sure was I was still heading west. Apart from that, each day was something of a lucky dip.

Hiding in the shade of a pedestrian overpass. The only shade from the blistering blue skies.

According to the BBC World Service weather forecast it was going to be yet another 35-40C day. The road I took was the M2 freeway, Iran’s number one 6-lane monstrosity. It was as boring as all hell. So Qazvin came and went with nothing more than a pitstop. An insult to history for sure but I was starting to run low on interest in Iran. My eyes were firmly fixed on the Turkish border.

I persevered with the monotony of the M2 and eventually Zanjan appeared out of the heat haze. It was still only early afternoon and I briefly considered riding all the way to Tabriz. But only briefly. I decided to call it a day and began the search for  some accommodation.  I found the Park Hotel, a modest little place with friendly staff, right on Azadi Square. It was nothing special but it was inexpensive and had secure parking for the bike – something the Ferdowsi International Grand in Tehran didn’t have! I spent the cool of the late afternoon and early evening wandering around Zanjan. It was a  modern city but pleasant in a way that Bognurd and Gorgan weren’t.

But my stay in Zanjan was necessarily brief as my mind wandered further afield.

END_OF_DOCUMENT_TOKEN_TO_BE_REPLACED

Posted on December 3, 2012 by briansworldtour

Eid al-Fitr, the feast held to celebrate the breaking of the fast of the holy month of Ramadan, had started at sunset on Saturday which explained why the Ferdowsi’s restaurant had been completely packed. The tables groaned under the weight of a month’s worth of unsated appetites. It was party time. But without the  Bacardi Breezers and Jaeger bombs!

Which was great for the locals who had been hanging out for a decent feed. But it wasn’t so great for me. The next day everything was closed. I tried to visit several museums. All were closed. I tried to visit Golestan Palace. Closed.  I wandered around the backstreets of the bazaar. Even most of these stalls were closed. It seemed everything was closed except for the occasional street vendors.

After a couple of hours of walking for little reward I decided to return to the Ferdowsi. At the reception I asked the staff if the museums and the Golestan Palace would be open tomorrow. I was out of luck. Again. Apparently, the Ayatollah had proclaimed Monday as an extra public holiday. Good one, Tazza!

I decided it was time to escape from my gilded cage at the Ferdowsi.

END_OF_DOCUMENT_TOKEN_TO_BE_REPLACED

Posted on December 3, 2012 by briansworldtour 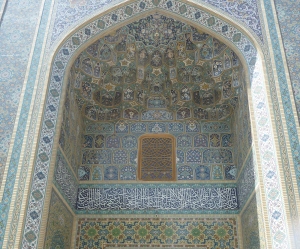 The entrance to the Malik National Museum and Library – an iwan worthy of the Registan.

Tehran is probably not on the top of too many tourist’s to-do list. Which is a shame really because it has quite a lot to keep tourists happy. It is bursting at the seams with museums. In fact, one of the reasons the Ferdowsi was recommended to me was because it was in southern  Tehran – the old part of the city where many of the museums are located.

Also within a short walk, just past the manic Imam Khomeini Square, was the Golestan Palace complex. Golestan Palace was home to the profligate Qajar dynasty for over 200  years but some of the buildings in the complex (there are  about 20 palaces and buildings) are over 400 years old.  Like all palaces around the world, the Golestan Palace is a monument to the greed and excess of its royal inhabitants.

As well as these traditional museums there are museums that show the darker side of Tehran’s history. The Iran Ebrat Museum is a truly gruesome reminder of the role that SAVAK,  the last Shah’s hated secret police, played in modern  Iranian politics by torturing political prisoners.  And of course there is the infamous “US Den of Espionage” – the basement of the former US embassy where the CIA planned and executed the 1953 coup that overthrew Mossadegh. But it is usually only open by special request.

After spending the best part of my first day doing the rounds of some of the museums I headed back to the Ferdowsi. With daytime temperatures refusing to drop below 37-38C  I was happy to return to my little piece of air-conditioned Iran.

But I felt there was something missing.