To Sarahs and the border

Posted on October 8, 2012 by briansworldtour

From Mary to the border post at Sarahs was about 270km if I stuck to the main bitumen road. There was a shortcut past the Hanhowuz Reservoir which was much shorter but I had been told the dirt road was in pretty bad condition. I had seen enough bad dirt roads in my travels and this one travelled through a particularly remote corner of Turkmenistan. With the prospect of another 40 degree day I reasoned  that the bitumen may be longer in distance but probably not that much longer in time. And I didn’t fancy the idea of turning up at the Iran border completely knackered from riding 2-3 hours across the desert. 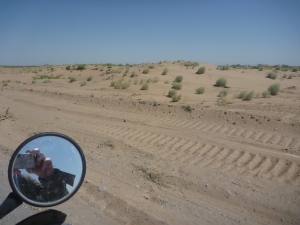 More of the same – low sand dunes and saltbush scrub.

I said a fond farewell to friendly folk at the Yrsgal Hotel and set off to ride the 70km  to the little town of Hanhowuz where I would have to make my final decision about my route. The landscape along the way was a continuation of yesterday’s desert dunes.

On the outskirts of Hanhowuz I stopped beside a police car and asked them about the shortcut. They told me it was closed and not to go that way. No problem. I didn’t really  want to go that way anyway but I thought I should at least make a token effort and ask. Now I knew for certain I only had about 2-3 hours of riding to the border at Sarahs. 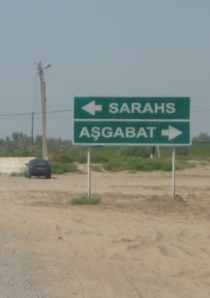 From one side of the country to the other – the first road sign in 400km of highway!

And I was glad I chose the easy option because  after about 70 km, at the turn-off just outside Tejen, I would have missed a rare sight – the first roadsign since the border crossing at Farap on the other side of the country! From the turn-off it was about 130km to dusty little border town of Sarahs. In less than 2hrs I would be at the Iran border and my travels  and travails in Turkmenistan would be over.

Exiting Turkmenistan proved to be much simpler than entering Turkmenistan. There was the usual administrivia but  I was amused when the immigration officer pointed to the exit date on my visa and then to today’s date on his desk calendar, recognising that I was leaving on the fourth day – a day early. He gave me a big smile and a thumbs-up!

But today was not just about escaping the parallel universe where Turkmenistan is normal. Far more importantly it was about entering Iran. No other country in my travels had provoked such mixed responses from people as Iran. Everything from “paradise on earth” (hardly) to “full of terrorists” (unlikely). The truth, of course, is somewhere between the two extremes.

And I was about to find out for myself.

Mary and the Hotel Yrsgal

Posted on October 7, 2012 by briansworldtour

I made a relatively early getaway from Sayat as I had to ride the 50km back to Turkmenabad and refuel. And I was determined to cover as much distance in the cool of the morning before the mercury headed for 40 degrees again. Back in Turkmenabad, for the third time in two days, I refilled the tank at a different petrol station this time, not wanting a repeat of yesterday’s calamity. I was greeted by a young girl dressed in a smart company uniform.

As she filled the tank she asked me, in very broken English, the usual questions: where I was from, where I had been and where I was going. In situations like this the map of the world on my pannier was worth its weight in gold. I could point to Australia, wherever I was at the time and my finishing point. However, I usually said London, not Dublin as most people had never heard of Dublin.

The young girl was able to hold a conversation and fill the tank at the same time without spilling a drop – both of which were well outside “the skill set” of yesterday’s dropkick. For the same reason, I suppose, why adolescent boys shouldn’t work on the checkout at Coles or Woolies!

After my pleasant little interlude with the pleasant young girl, I steeled myself for what lay ahead of me – 250km of nothing!

END_OF_DOCUMENT_TOKEN_TO_BE_REPLACED

A day in the life of the real Turkmenistan

Posted on October 6, 2012 by briansworldtour

As I rode back down the road I had just ridden up not more than 30min ago, I began to wonder just what the consequences of my split-second decision would really be. If nothing else it would answer my question about what were the ordinary people of Turkmenistan like.

To be honest, the little town of Sayat could only be described as “nondescript”. It was a small market town for the surrounding area with no outstanding physical attractions. But, as in all such places around the world, the generosity of spirit of its people more than make up for any perceived lack of beauty.

At Bahar’s home I was welcomed like a long-lost relative. The family home was full as there was to be a wedding in two days’ time. Initially I was unsure about intruding on such an important family occasion but everyone assured me that “the more, the merrier” was the case and I was immediately made to feel at ease. Shortly after arriving the endless lunch began and every family member went out of their way to make sure I was fed, watered and comfortable. This was a family that did not know me one hour ago!  END_OF_DOCUMENT_TOKEN_TO_BE_REPLACED

Sayat – on the road to Afghanistan

Posted on October 5, 2012 by briansworldtour

The Hotel Jeyhun in Turkmenabad – another palatial, but empty, mausoleum. This one designed to extract as many US dollars as possible from the handful of Western tourists staying there.

Next morning my fellow motorcyclists and I had a  frank discussion with the hotel clerk about the bill and the exchange rate. He couldn’t have cared less.

So after repacking the bike I bade farewell to the Spanish couple, Jose and Pilar, and a young English woman, Fern as they continued their long  journey east  to the Chinese border. I headed off in the opposite direction. Our time at the Hotel Jeyhun, we all agreed, had been decidely odd.

According to my map, there was only one major road leaving Turkmenabad on the southern side – the highway to Mary (where I was heading) with a minor road coming off that to the left that eventually lead to a remote border crossing to Afghanistan several hundred kilometres away.

As I reached the large roundabout on the southern outskirts of town, the “main” road continued straight ahead with minor roads coming off left and right. Even in the absence of any road signs everything seemed so straightforward (no pun intended) that I didn’t bother to stop to check with the locals as I normally would.

So off I trundled down the “main road” enjoying the surprising good bitumen and lack of traffic.

END_OF_DOCUMENT_TOKEN_TO_BE_REPLACED

Turkmenistan? Are you serious?

Posted on September 27, 2012 by briansworldtour

Throughout my trip I had met a few people who had crossed Turkmenistan by various routes during their 5-day transit visa. And I had listened in astonishment as each of them used almost identical words to describe the country. Words such as odd, weird, different, strange, bizarre. After all the time and energy I had spent getting my Turkmen transit visa in Dushanbe I hoped that it wouldn’t be a complete waste of time .

What was it about Turkmenistan that elicited such an unusual response in people? I was about to find out. All too soon!