Some impressions of motorcycling across India

Posted on June 1, 2012 by briansworldtour 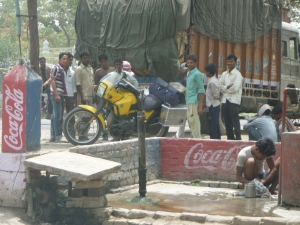 Another mass examination of the big yellow bike.

Any stop by the side of the road turns into an opportunity for locals to examine the big yellow bike. The most common questions are:

The vast majority of bikes here are 200cc or less – usually Japanese brands assembled locally and rebadged as Heros (Hondas), Pulsars (Suzukis) or Yamahas. There is one brand called Bajaj which, because the “j” is pronounced a bit like a “z”, the name sounds a bit like “Bazza’s”.  Also, the fact my bike has no chain is a cause of great concern to some.

Rear view mirrors are rarely used here. Most old bikes have either lost them in the street battles over the years or, more bizarrely on newer bikes, have them folded in to protect them from the street battles!

I have travelled approximately 1500km since coming to India and have only seen one other foreign motorcycle. It was heading south towards Delhi just north of Karnal. Just got a glimpse of it going the other way in the heavy traffic. Didn’t even have time to wave.

One thought on “Some impressions of motorcycling across India”