On the road to Islamabad

Posted on June 7, 2012 by briansworldtour 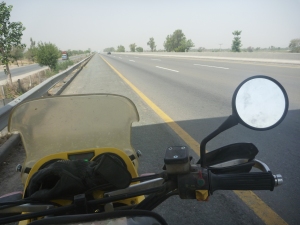 Relaxed and refreshed after two nights of 5-star luxury, it was time to hit the road again. But heading out of Lahore the bike suffered a catastrophic failure – the horn stopped working! On the sub-continent, only two things are essential for surviving the traffic madness – the throttle and the horn. Everything else, including brakes, is optional apparently.

No matter. Press on regardless.

The M2 motorway is about 75km longer than the GT Rd but promised unhindered travel by avoiding the endless bottlenecks caused by the innumerable market towns along the way. However, there was one small problem. Motorcycles are not allowed on the motorway. Or so I had been told. I had also been told that international vehicles were exempt. And I had also been told that motorcycles could use the motorway if the motorcycle and rider met certain conditions.

I had also been told that I would need to get a special permit from an office in the city which didn’t open until 9am. The thought of waiting around until 9am and then going back into the Lahore CBD to try to find this obscure office and then trying to get the permit was too much for me. I headed out of Lahore and hoped I wouldn’t get stopped.

At the toll gate entering the M2 motorway, I got pulled over by the Motorway Police 5m after I got my toll pass. Immediately, I was asked for my permit. I told them that I had been told that international vehicles were exempt. (Which was true – I HAD been told international vehicles were exempt. I just didn’t know if it was true or not). After a slightly uneasy introduction, phone calls were made to somebody’s superior officer and, while waiting for a decision, I had a very friendly chat to the police who wanted to know all about my family and life in Australia. Eventually, after about 10-15min, they wished me well and waved me on my way up the M2.

The M2 was everything that the GT Rd wasn’t. Six lanes of virtually deserted world-class freeway. No donkeys stubbornly refusing to unblock intersections, no bullocks hauling drays massively overloaded with bricks, no cycleshaws going so slowly that if they went any slower they would be going backwards. And everybody driving on the right side of the road. Bonus! (Well, almost everybody)

For the first time since arriving in Kathmandu, It was a joy and a relief to be able to ride without worrying about where the next kamikaze driver, goat or pothole was coming from. Kilometre after kilometre of effortless cruising at 100-110km/h as the bike was finally able to breathe freely once again after weeks of dredging along congested roads in 2nd and 3rd gear.

The Salt Range emerging from the smog. The first elevated land since I dropped down out of the Kathmandu Valley and onto the Terai in Nepal.

Gradually, out of the smog and heat haze emerged the low mountains of the Salt Range which divides the Indus river plain from the broad flat plain of the Punjab. The M2 elegantly carved its way over the range providing many stretches of very enjoyable riding punctuated only by occasional heavy trucks and buses playing “I think I can, I think I can” as they stuggled to haul themselves up and over the range.

From the Salt Range it was just a short ride to Islamabad which was to be my home for about 1-2 weeks while I applied for my next batch of visas.