From Murree to Abbottabad 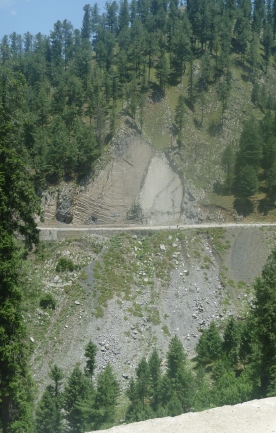 With yet another unexpected change in plan, I decided to head for Abbottabad – a relatively large city at the foot of the hills about 70km away – where I had a couple of jobs to do. One was to get money as none of the ATMs in Murree would accept foreign cards. The other was to get petrol – an increasingly problematic issue wherever I travelled across Pakistan.

Finally getting away from Murree after the obligatory 15 minute photo opportunity for the locals, the road from Murree to Abbottabad turned out to be a complete joy for a motorcyclist. With relatively light traffic, it was an endless series of tight corners and gravity-defying hairpin bends. Combined with the cool mountain air, it made for great riding – albeit at low speed. Around every bend was a vista worthy of a photo – along with evidence of recent landslide activity! Slowly I descended the mountain range, stopping every few kilometres to take photo after photo of the stunning scenery. Eventually I was back on the flat but slightly elevated plain on which Abbottabad sits.

Abbottabad is a city of just under 1 million people. Arriving in the city brought the return of heavy traffic, choking diesel fumes, free-for-all driving and a high demand for the horn. I was very glad that I fitted the replacement horn in Islamabad. Originally I had had no intention of staying in Abbottabad. In fact, I had planned to skirt Abbottabad completely due to its unfortunate connections to Osama bin Laden. 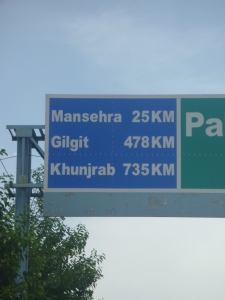 The start of the climb up to the Khunjrab Pass into China – 735km to go!

(As an aside, the most important aspect of Abbottabad, for me, was that it is the only major city on the Karakoram Highway, or the China-Pakistan Friendship Highway to give it its official name. The Karakoram Highway (usually abbreviated to KKH) is the road that will take me up into the peaks of the Karakoram Range, through the Khunjrab Pass into Xinjiang, the far western region of China, in about three weeks time.)

Since I started travelling I have got into the habit of not allowing the tank to drop below half-full. So the first order of business in Abbottabad was to find a petrol station that actually had petrol to sell!

After filling the tank, the plan was simple: find a Standard Chartered bank ATM for more cash and head a further 30km up the road to the much smaller and less chaotic town of Mansehra. But that plan was about to change, and change in a very unusual way.

And this is were a new story begins.

2 thoughts on “From Murree to Abbottabad”