Shah Faisal Mosque – lacking the traditional dome it was designed to resemble a bedouin tent.

Still undecided about going to Murree for the day, a chance comment by one of the other guests solved the problem. Danya was an aid worker for one for the many NGO’s operating in Pakistan. As we chatted over breakfast about our respective plans for the day, Danya quipped that maybe I could have my cake and eat it too. Immediately, the light bulb came on. I wouldn’t have to make my trip to Murree a daytrip at all. I could change my route north to include Murree. Not only that, but I wouldn’t have to retravel the same boring stretch of GT Rd that I rode to Taxila yesterday.

So my last day in Islamabad was free to use as I chose.

Even though I had been in Islamabad for nearly a week I realised that I hadn’t really seen much of the city itself apart from embassies, banks and shopping centres. So, after doing a few domestic chores I decided to do some sightseeing around the city. The first visit was to the massive Shah Faisal Mosque.

The Shah Faisal Mosque was a gift from Shah Faisal of Saudi Arabia and is one of the largest mosques in the world. The main hall can hold 10,000 worshippers in the main prayer hall, another 20,000 in the adjoining porticoes and another 250,000 in the courtyard and surrounding grounds. 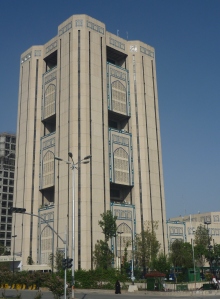 Another stunning piece of modern Islamic architecture is the Saudi-Pak Tower. A modern high-rise office block, its main distinguishing features include the almost total lack of external glass windows typical of just about every Western high-rise building and the delicate use of traditional blue tiles to contrast the biege exterior.

Not far from the NCG was the Rose and Jasmine Garden.  A large park covering many acres, the locals flock to it in the late afternoon and early evening to escape the heat and enjoy the cool shade of the large trees and admire the many varieties of roses. Islamabad calls itself “The Green City”. It certainly is green compared to what I’ve seen in the rest of Pakistan.

Eventually I got tired of dodging all the Sunday afternoon drivers and called it a day. Tomorrow I would head for the hills and spend a day or two in Murree.