Posted on July 8, 2012 by briansworldtour

The Madina Hotel and Guesthouse in Gilgit was to become my temporary home for almost a week.

Gilgit is the only major town on the KKH north of Abbottabad and the last one before the Chinese border. While in Gilgit I had a few tasks to complete. The first was to find an ATM that would accept MasterCard/Maestro/Cirrus type cards. The second was to await the arrival by email of the all-important visa code for my Iranian visa. The third was to stock up on any grocery items before I ventured further north into the more remote parts of the Hunza valley where I would be staying for a few days while I organised how to get myself and the bike on to a boat that would take me across Lake Attabad.

Since leaving Abbottabad, I had been gradually whittling away my stash of rupees as none of the ATMs in Besham and Chilas would accept my cards. Before leaving Australia, I had enquired at both the Commonwealth and Westpac banks about getting a VISA debit card. Both banks confidently assured me that it was unnecessary as I could use my existing cards anywhere that accepted VISA cards. And I was silly enough to believe them! If there is one piece of advice I would give to anyone travelling in Asia outside the major cities, it is this: Do not leave Australia without a VISA debit card.

My first two days in Gilgit were spent trudging up and down the grubby streets of Gilgit’s markets trying every bank I could find. There were a surprisingly large number of different banks but all accepted only VISA cards. When I eventually did find, in a dank side alley, the one and only bank that would accept my card, I also found that it was broken, had been broken for several weeks and would remain broken for the foreseeable future. Finally admitting defeat I decided to change some of my hard US dollars and replace them when I got to China.

I occupied the rest of my time in Gilgit with a variety of social activities.

On my first night at the Madina, I found myself in the company of an odd assortment of foreign travellers for the first time since leaving Kathmandu, almost five weeks ago. I had become accustomed to being the only foreigner wherever I stayed, trying to communicate in broken English and mime.

The other guests at Madina included a couple of Thai women, one English/Australian guy, one Korean guy, one Canadian guy, a Japanese couple, one American guy and one Swiss guy. Fortunately for me the lingua franca was English. Initially, I enjoyed the conversation around the communal table but very soon I remembered why I disliked such gatherings. Inevitably the conversation descends into a competition to see who can outdo everyone else with tales of their intrepid exploits. I found the constant one-up-manship of the two main protagonists irritating, took my leave and returned to the relative peace of my room.

Next morning, I have to admit, I was pleasantly surprised to find that most of the other guests had left for various treks or destinations, leaving Muk (the Korean), Michael (the English/Australian) and myself as the only guests left. This was to remain the situation for a few days until Michael left in search of more carpets/rugs. Muk and I struck up an unlikely friendship as our paths crossed at random times over the ensuing days. A few times, an overnight guest would appear but they would be gone next morning. 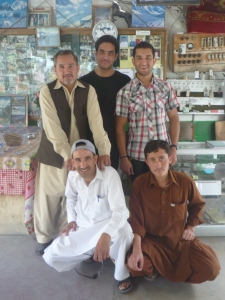 As the lazy days blurred into one, I had many interesting conversations with the staff of Madina. The Madina is owned by the remarkable Mr. Yaqoob.A veteran of the boom time for tourism in the 80’s and the 90’s, Mr Yaqoob had seen tourism in Pakistan disappear virtually overnight in the aftermath of 9/11. Even though there had been a gradual improvement, that had also declined in the last few years as Pakistan struggled with a variety of internal and external problems. Consequently, while the Madina was capable of hosting about 40 guests, nowadays it rarely saw more than 10 at any one time.For a variety of reasons, Mr. Yaqoob was in the process of opening a New Madina Hotel that would cater for more mid-range tour guests and not his traditional back-packer market. This was an ambitious decision given the parlous state of the tourism industry in the northern parts of Pakistan.

Unexpectedly, my Iranian visa code turned up several days earlier than expected leaving me with no reason to stay any longer in Gilgit. However there were a couple of places that I wanted to visit before I left. One was the British Cemetery and the other was the Kargah Buddha. 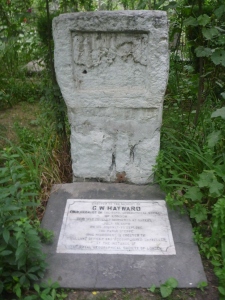 The British Cemetery in Gilgit is a reminder of times long gone. It contains the grave and headstone of G.W. Hayward. Hayward was an example par excellence of the 19th century British soldier/explorer/adventurer. After a distinguished career in the British Army in India, Hayward decided to march to the beat of his own drum and turned his not-inconsiderable talents to his own adventuring. As well as being a gifted linguist, his military training provided him with the ideal preparation for his new career as an explorer/agent/spy in the pay of Her Majesty’s Government. Hayward was awarded the Gold Medal by The Royal Geographical Society in London for his contribution to exploration in the then virtually unknown area of what is now known as the Wakhan Corridor of Afghanistan. Of course, all of this was taking place at the same time as the so-called Great Game – the political stand-off between Britain and Tsarist Russia of the mid to late 19th century.

Unfortunately Hayward met a grisly end when one of the local tribal leaders decided that he had had enough of European explorers and agents traipsing around in his mountains and sent a band of tribesman to dispose of Hayward and his entire expedition. Many years later his remains were recovered from the mountain pass and he was reburied in Gilgit. The British Cemetery is also the last resting place for several 20th century mountain-climbers who have perished in the Gilgit region following their own desire for adventure – like Hayward, a hundred years before. 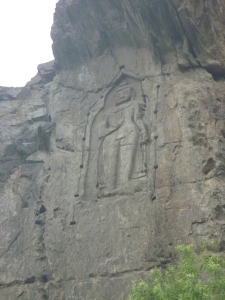 My final sight-seeing trip was to the Kargah Buddha just west of Gilgit. The carving of the standing Buddha is believed to date from the 7th century when Gilgit was one of the most important stopovers for Buddhist monks and pilgrims travelling between China and India. The Buddha is about 5m tall and is carved into the sheer rock face some 20-30m above ground level.

So my time at Madina was drawing to a close.

It was now time to start thinking about the next stage of my trip up the KKH. My next stop was Karimabad, the main town of the historic Hunza Valley. Here I planned to spend about 3-4 days while I filled in some more time and organised the details for my imminent boat trip across the recently-formed Lake Attabad.

Karimabad was a mere 110km up the road. What surprises would the KKH hold for me on the next leg?