The KKH Part VII: Sost to Khunjerab to Tashkurgan: The Road to Frustration

Posted on July 8, 2012 by briansworldtour

Ever had one of those days where things go from bad to absolutely f..ing diabolical?

Well, today was one of those days that all overland travellers hope they never have to endure.

With all money and petrol issues resolved, all I had to do was clear Pakistani Customs and Immigration, ride about 85 km (on jeep track) to the border, clear Chinese Customs and Immigration and ride about 120km (on good bitumen) to Tashkurgan. Thinking that I now had some experience at this game, I believed that it would be a relatively straightforward day. 6-8 hours max.

As a requirement to take my bike into China, I needed temporary Chinese registration and driver’s licence. My tour guide (another requirement) was to meet me at the border with all the appropriate paperwork, so I wanted to get to the border as early as possible.

I had been told (by the Chief Customs Inspector no less) that the Pakistani Customs and Immigration office opened at 8:30am sharp, so I arrived a few minutes after 8:30am. I needn’t have bothered. I was met by a host of bored faces belonging to people who were also waiting for the office to open. One of them informed me that the office would not open until 9am. No problem. Only 30 minutes.

The only foreign tourist on the bus and the last person I would have expected to see in a conservative Muslim region: a genuine New York Jew.

Shortly after 9am the officials started to dribble into work. Of more concern to me though was the arrival of a large NATCO bus, with about 20-30 local people (and one foreign tourist) and associated luggage, produce and merchandise on board which was also heading to Khunjerab. Given my experience entering Pakistan a month ago, I knew the local bus passengers would be processed first.

Miraculously I was finished just after 9:40am. A new world record!All I had to do now was clear Immigration and I would be on my way – even earlier than I thought. 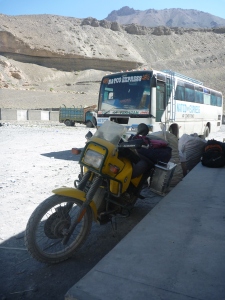 The bloody NATCO bus: my unwanted companion for 12 hours

Because all the bus passengers were still being processed by Customs the Immigration waiting room was empty. This will be a breeze, I thought. There were several offices, none of them clearly marked for immigration processing. As I enquired at each office I was simply told to sit and wait.

This is where it all started to go pear-shaped.

So wait I did – for almost an hour. Every so often I would ask someone what was happening. They simply told me to wait. All the while the waiting room was filling up with the bus passengers as they were gradually processed by Customs. I could see the morning hours slipping away. No of us were told why we were waiting until suddenly the lights came on – both literally and metaphorically. We had been waiting for the electricity to come back on so the computer network would be able to process all the exit formalities. Oh for the days of a rubber stamp!

By now it was nearly 11am and all the bus passengers were scrambling to be first. I couldn’t understand the mad rush because the bus couldn’t leave until the last passenger was processed anyway. Resigned to my fate to be left until last, I was relieved to be called in after only 15-20 minutes. My passport and visa were checked and stamped. It was only 11:15am and I was free to go.

Or so I thought.

When I went back out to the bike it was surrounded by people. Nothing unusual there – until I started to get ready to leave. A particularly nasty looking piece of work asked me to open all my bags and panniers. So I had to open everything for inspection. Fair enough – a reasonable request in this part of the world. But he wanted to inspect EVERYTHING. He wanted know if I had a “permit” for the malaria tablets. He took one of the Indocid anti-inflammatory capsules out of the bottle, opened it up and sniffed the contents.  He opened the little bottle of free hotel shampoo that I have been carrying in my shaving kit for the last n years.  He took my First Aid kit apart, item by item, and asked what everything was used for. I thought, surely, a triangular bandage or a box of bandaids is the same everywhere in the world.

But the piece de resistance was the soap. Mr. Nasty had an old bicycle spoke which had been sharpened to a point. As he plunged the spoke into the bar of soap, looking for my secret stash of something, he asked me what it was. As this farcical charade had gone on for over 30 min, I couldn’t help myself.

I replied and mimed, “It’s soap. For washing. You should try it sometime.” A faint giggle of laughter rippled around the assembled audience. Mr. Nasty didn’t speak much English, but he probably guessed I was taking the piss out of him. Strangely, no smile lightened his surly demeanour. Immediately I thought, “Mmm …. prob’ly shouldn’t have said that” – my travel plans for the day were at his mercy. But, honestly, the entire search process was being taken to ludicrous levels.

Abruptly, Mr. Nasty said he was finished and that I could go – leaving one whole pannier and my backpack completely untouched. What a monumental waste of time! As I was repacking the bike, the Customs officer who had processed my carnet all those hours ago came over to me and wanted to explain that Mr. Nasty didn’t work for Customs. It turned out he was from Pakistan’s ANF (Anti-Narcotics Force). Mr Nice Customs Man said even the locals didn’t like the ANF.

Even more bizarrely, while Mr Nasty was busily inspecting my tube of toothpaste for kilos of narcotics, whole rolls of cloth the size of small hay bales were being loaded, unchecked, onto the roof of the bus.

By now it was just after 11:45am and I had been at the office for over three hours. But more importantly, while Mr Nasty was delaying me, the NATCO was getting ready to leave. I knew that if I didn’t get to all the checkpoints before the bus I would be held up every single step of the way. After the usual round of photo opportunities I quickly left to put some distance between myself and the bus.

I was never going to come this way again. It was now only 50km to the border at Khunjerab and I certainly didn’t want to get caught at the Chinese Customs and Immigration office with the bus.

I had been told by several people that the road actually got worse the closer you got to the border. And they were right. It was back to 1st and 2nd gear stuff. I was lucky if I could do much more than 30km/h. The last 5-10km were the worst. While taking some photos, within sight of the pass, I looked back and saw the bus only a couple of kilometres behind me. Bloody photography!

At last the Chinese border at Khunjerab Pass (4935m).

I reached the actual border just after 3pm and was greeted warmly by the Chinese guards and welcomed to China. I rode the 2-3km to the Chinese Customs Post and this is where a bad day suddenly got a whole lot worse. Even though I had beaten the bus by about 10min the Chinese police refused to process me and told me to wait. I knew what was coming. Sure enough, the NATCO bus pulled up and every single person, their mountain of luggage and all the cargo was unloaded and physically manhandled up the path, through the door and into the Customs office – including the enormous hay bales of cloth, some only just fitting through the double doors.

This may take some time, I thought.

One by one, the passengers, their shoes and their luggage were screened à la airport security. It took about 5-10min per passenger as each person’s bags were opened, unpacked, examined item by item and then repacked. As there were about 20-30 people on the bus, I estimated that I could be there for up to 2-3 hours.

After waiting for about an hour, I was gobsmacked when I was called back out to the bike and told to unpack the entire bike, including the panniers, and take the whole lot up the stairs and into the Customs office. Surprisingly, I was allowed to jump the queue after about another hour. This may not be so bad after all, I thought.

Even though I had cleared Customs, the border police would not return my passport. Despite asking repeatedly to have it returned, I was told to wait. They wouldn’t tell me why I had to wait. It was now about 5:30pm. I had been at the checkpoint for over two hours, had completed all the border formalities but still couldn’t leave as I had no passport.

I now had a couple of more pressing matters to consider. The Khunjerab Pass is at 4900m – seriously high and seriously cold, even in the middle of summer. Even minute I wasted waiting at the checkpoint meant I was losing precious daylight for travelling. It was slowly getting darker and colder.

As well as that, there was no sign of my guide who was supposed to meet me at the checkpoint and help with any potential problems.

Finally at 6:30pm the bus, its passengers and its cargo had been checked and was allowed to leave.

Where’s my passport, I demanded to know. Eventually I was told that a police officer was going to keep the passports of all foreigners (ie. not Pakistani or Chinese) and travel on the bus until we got to the Customs and Immigration office in Tashkurgan – about 120km away. For me, this meant riding for another one and a half hours in gradually fading light and plummeting temperatures.

By 8pm, the sad little caravan of the clapped out NATCO bus with the little yellow BMW, tagging along behind like a faithful dog, straggled into Tashkurgan. And, finally, I met up with my guide. Due to the time difference it was now 9pm local time in Tashkurgan and the real Customs and Immigration officials were not happy about having to work back to process latecomers like us.

And so it started all over again. Unload the bus, roll the bales of cloth across the carpark, up the stairs, through the doors and into the Customs office.

Please unpack your entire bike, including panniers, and take it to the Customs desk. You must be joking!

So I had to go back out to the carpark and completely unpack the bike and take it all inside.

HOW MANY TIMES DO I HAVE TO TELL YOU? THE POLICE TOOK IT OFF ME IN KHUNJERAB AND WOULDN’T GIVE IT BACK TO ME!

I know that raising your voice does not necessarily improve comprehension but it made me feel better and certainly had the desired effect. They went looking for the police officer who was still holding all the foreigners’ passports. So with my visa checked, my passport stamped and my luggage not even looked at, I thought I was free to go.

Not so fast, Sonny Jim.

Finally, I had my bike, my luggage and myself reunited on the exit side of the building. After repacking the bike and with my guide to pilot me I finally escaped to my hotel about 10pm.

It had been over 12 hours since I had fronted up at the Pakistani Customs and Immigration office in Sost full of optimism that it would be a fairly straightforward day.

And you know what the sad part of this saga is?

This is only about half of the story!