Kashgar – In the City of the Uyghurs

The city of Kashgar has been home to the Uyghur people for many centuries. Successive Chinese dynasties have tried, with varying degrees of success, to control this harsh region many thousands of kilometres west of Beijing. Known by various names over the centuries, it was most commonly referred to as Kashgaria or more recently as East Turkestan. The local Uyghur people have far more in common (language, religion, ethnicity and culture) with the nomadic peoples of Central Asia than the Han Chinese far away to the east.

At the end of WWII in 1945 the region declared itself independent as the Republic of East Turkestan. However this was short-lived after the final victory of the Mao Zedong’s Communists over Chiang Kai-shek’s Nationalists in 1949. East Turkestan was then renamed “Xinjiang Uyghur Autonomous Region”. The name still rankles with most Uyghurs as “Xinjiang” in Chinese means “New Land” – something which denies the fact that the Uyghurs have lived here for many centuries before the Communist government finally took complete control. Also, it is far from “autonomous” as most government decisions are made by the small Chinese minority who control the political processes.

Now, Kashgar is a big city with just under 1 million people, traffic lights and all the associated traffic chaos. It was, by far, the biggest city I had seen since leaving Islamabad over a month ago. Kashgar came as a bit of a shock at first but I soon learned to appreciate its modern facilities, like ATMs that worked and free WiFi.

Right beside the Seman Hotel was the incongruously named John’s Café. The owner, John Hu, has been a pioneer of tourism in Xinjiang since the mid-80’s. John’s Café was to become my second home in Kashgar for a number of reasons.

Firstly, it provided free WiFi. The only drawback was that all social media (eg. Facebook, YouTube etc) and many blogging sites, such as WordPress, are blocked by the Chinese government. I can do without Facebook but with no access to WordPress I had to find an alternative way of posting blog updates. So by emailing the text and photos back to Australia, I was able to get the blogs posted. This was a very tedious way of doing it but there was no other option.

Secondly, it was able to reproduce a passable facsimile of a long black coffee – something I hadn’t seen since Kathmandu. And just for something different, one day I treated myself to one of John’s Café’s “hamburgers” – the first Western food I had eaten in a long time. The hamburger was a cross between a MacDonald’s cardboard cut-out replica and a real Australian hamburger (without the beetroot!). However the breadroll, like much of the bread in this part of the world, was slightly sweet which added an unexpected dimension to the taste.

The first morning in Kashgar was taken up with administrivia such as finding banks, changing money and paying the travel guide company. As usual I walked the streets of the centre of the city to familiarise myself with the layout of the city. Kashgar was a surprisingly easy city to get around. It was while walking back to the Seman that I noticed the heavy, and fully armed, police and military presence on many street corners and public squares in the city. The central government in Beijing was obviously taking no chances with the possibility of any sort of public display to commemorate the demonstrations/riots of a few years ago. 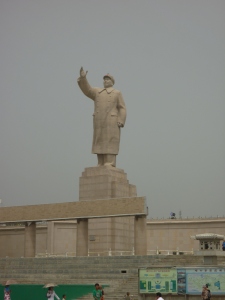 Apparently the cult of Mao Zedong still lives on – almost 50 years after his death.

This was my first visit to a fully-fledged communist country and I was intrigued to see that the hero worship of Mao Zedong via monumental statuary still persisted many years after his death in 1976. Unlike in the former Soviet Union states, where the once-ubiquitous statues of Lenin virtually all disappeared overnight, in the middle of Kashgar was a massive 20-30m statue of Mao in his familiar guiding, avuncular pose. The local people completely ignored it. Only the fully armed riot police, directly opposite, “guarding” the People’s Park (ironically, from the people!) seemed to pay any attention.

While in Tashkurgan I had inadvertently found out that Abdul and I shared a passing interest in snooker and immediately Abdul offered to take to me to the local pool hall. We searched for the elusive pool hall but weren’t able to find it. So on my second night in Kashgar Abdul Rekip made good on his promise to take me to a pool hall which happened to be just around the corner form the Seman.

Many years ago, I had been a keen player but I hadn’t played for a very long time – not since I started wearing glasses, that’s for sure! As I leant down to line up each shot I had to look over the top of my glasses revealing a sudden loss of focus, leading to the predictable loss of precision and the ultimate loss of the first game. I was able to win the second game but I suspect Abdul let me win out of charity to his guest. A third game against a vastly more committed and skilled gentleman from Pakistan resulted in a comprehensive defeat for me. The Pakistani was ecstatic and seemed pleased that Pakistan (as he wrote on the score sheet) had finally managed to defeat Australia (ie. me) at something – apparently making up for Pakistan’s many losses at Test cricket!

Saturday was a lazy day. One of the conditions of my permit was that I could not travel anywhere on the bike without my guide/escort. As I was not prepared to pay for this dubious privilege I contented myself with exploring Kashgar on foot. And I was glad to have the opportunity to wander around free from the constraints of my guide. 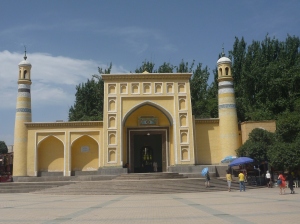 The distinctive lemon yellow of the Id Kah Mosque in Kashgar

So I set out from the Seman and walked around a large loop of Kashgar taking in parts of the original city with its traditional Uyghur mud-brick buildings. Eventually this loop brought me back to the Id Kah Mosque – one of the largest in China. The Id Kah Mosque is unique because of its distinctive lemon-yellow tiled exterior. Most mosques throughout this part of the world have the traditional turquoise coloured tilework on their exterior.

The tomb of Abakh Hoja – a mini Taj Mahal it isn’t.

On Sunday I decided to spend the day playing tourist – this time with a guide. I made my way to the tomb of Abakh Hoja, one of the best examples of Muslim architecture in Kashgar. It was built in the 17th century in honour of a Sufi missionary, Makhtum Azan, and houses the grave of Makhtum’s grandson, Abakh Hoja, who ruled Kashgaria briefly before it was eventually conquered by the Han Chinese. The tomb is supposed to bear a passing resemblance to a very modest Taj Mahal. I couldn’t see it myself.

Everything is available at the Sunday markets in Kashgar – including dried lizard and snake skins!

After visiting the tomb, I walked about 2km to the Sunday markets – famous for being the largest market of its type in Central Asia. There are supposedly 50,000 people who attend these markets every week. And I would believe it. The market covers a huge area and spills out onto the streets and alleyways in all directions. It is possible to buy just about anything from fresh produce to hand-woven carpets to mobile phones to live scorpions!

My stay in Kashgar had been brief but I was glad that I had been able to see some of the few remaining parts of the original city. In several years’ time there will be no trace of the fabled city of the Silk Road as, every day, more and more of it is being bulldozed in the name of progress.

But my time in Kashgar was really just to freshen up as I prepared mind, body and soul for the next major leg of my trip from Kashgar to Dushanbe. It was now time to finally put my journey up the KKH behind me once and for all. What lay before me now was a step into what was, for me, a completely alien world – the lands of the former Soviet republics of Central Asia.