A new day, a new country, a new start!

Posted on September 9, 2012 by briansworldtour

Crossing into Uzbekistan was like a breath of fresh air. The miasma that had overcome me in Dushanbe had lifted completely. Even though the ride to the border was only 70km, it was great just to be on the move again. 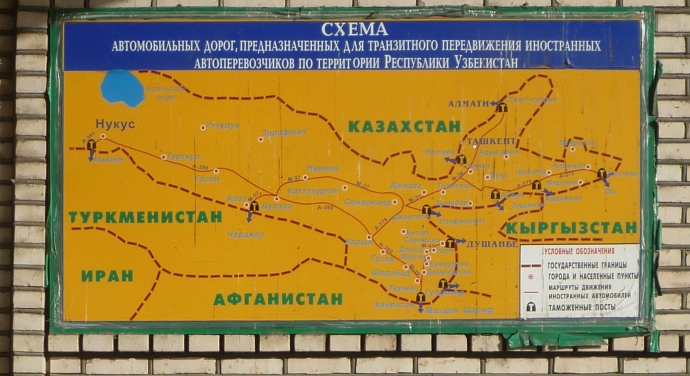 The Uzbek border post wasn’t much to look at but it was like a breath of fresh air to me.

The Uzbek border guards must have been bored when I arrived from Tajikistan because all five of them gave up on the 20-30 trucks waiting to cross the border and decided I needed special attention. All of them were friendly except for one. He asked me to unpack the entire bike on the ground. I was a bit surprised when he asked me to unpack my shaving kit completely. After inspecting every item, he grunted “Viagra”. I told him I didn’t have any Viagra. “Viagra!” he grunted again but more stridently this time. I repeated that I didn’t have any Viagra. “Viagra good!” he grunted a third time. At last I twigged. He wanted to confiscate any Viagra for his own personal use. I got the distinct impression that he was already suffering the side-effects of too much Viagra.

After giving up on his hunt for his next hit of Viagra, the guard then asked me to unpack my laptop. “What on earth for?” I wondered.

“Six”, he grunted as he pointed to the laptop.

“Six what!”,  I asked in exasperation.

I explained that I didn’t have any “six” videos on my laptop.

“Six video good!”, he repeated yet again as he made a suggestive movement with his right arm thrusting upwards. I was now certain that he had had way too much Viagra and it had constricted the blood flow to his brain as well.

After escaping the monosyllabic interrogation by the sex-crazed border guard I headed for the little town of Denov, which was only about 35km away, in search of a cheap hotel for the night. 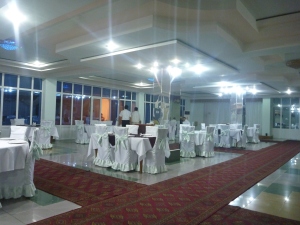 The restaurant of the Hotel Eurasia. The most elegant dining room I had been in for a long, long time!

I had asked a few locals where I could find a mehmonkhona or hotel. Each had replied something like “Furazia” and pointed down the main road. I travelled for about 2-3km but didn’t find a Hotel Furazia. I eventually stopped at the only hotel I came across. As I looked at the name of the hotel I realised this was the same place the locals had meant. The hotel was called “Hotel Euroasia” but somehow had become “Hotel Furazia” in Uzbek.

The Hotel Furazia was relatively cheap but certainly didn’t look it. When I went to have dinner in the restaurant I felt decidely underdressed. I ordered some kebab with salad and my first Uzbek piva, and then headed for a good night’s sleep

My trials and tribulations in Tajikstan were over. Tomorrow would be a new day, I would wake up in a new country for the first time in three weeks and hopefully it would be a fresh start to the next stage of my trip.