Sweet to ride forth….

Posted on September 11, 2012 by briansworldtour

As I rode out of the driveway of the Shakhrizabs Hotel, it suddenly dawned on me that today I was about to fulfil a long-held dream – a dream that began with a chance literary encounter. 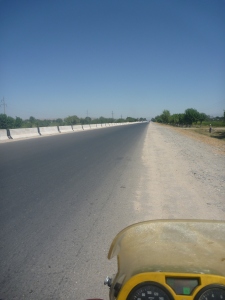 The road to Samarkand – maybe not golden or silent anymore but a rare moment of solitude and time to reflect on a dream realised.

More years ago than I care to remember, I had read a novel that contained a short excerpt of a poem that captured my imagination for some reason. To this day I don’t remember the name of the novel but I eventually tracked down the poem. (This was in the pre-Google days, pre-computer days in fact, when you actually had to go to a library and search through the author index card system for a Dewey Decimal call number and then physically search the shelves for the elusive text).  The poem was  “The Golden Journey to Samarkand” by James Flecker (1913). A poet of some merit, Flecker served in the British Diplomatic Service in Istanbul and Beirut where he developed a love of the exotic world of Asia – far removed from his  days at Oxford and Cambridge. He died at the very young age of 30 from tuberculosis. There is no record that he ever visited Samarkand.

After reading Flecker’s poem in full I dreamed that, one day, I too would travel on the golden road to Samarkand. And now, several decades later, that day had finally arrived.

Strictly speaking I wasn’t travelling on Flecker’s road at all. His romantic vision of Hassan and Ishak’s caravan heading for Samarkand left from Baghdad in the west and travelled across the deserts of Persia. I was approaching from the south but, no matter, it was close enough for me. I was only 90km, or an hour’s ride from Samarkand. Unfortunately, there is nothing romantic or golden about the road now. It is still a major trade route but the bells no longer beat softly through the silence. It is more a case of the horns blare loudly through the chaos. 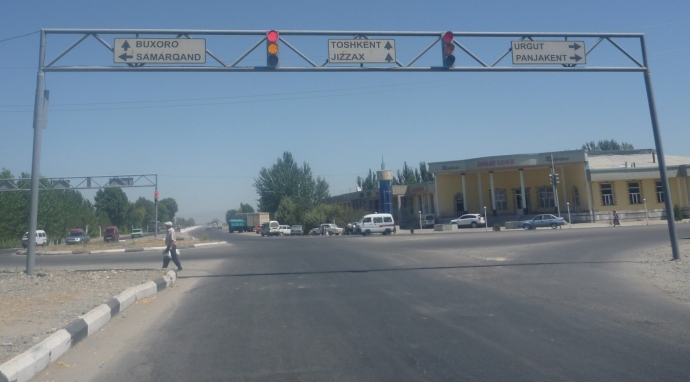 The crossroads of history. Some famous people have come this way – Alexander the Great, Jenghiz Khan, Marco Polo, Tamerlane. And now me!

On arriving on the outskirts of town I took the first exit from the highway which unfortunately took me straight into a maze of back alleys in the old part of town.  Eventually I extacted myself from the chaos and found my way to the city proper. From there it was a short ride to the guesthouse I was looking for – Bahodir B&B. Bahodir had been recommended to me by many travellers and I soon discovered why. Bahodir B&B was situated spitting distance from the Registan – the No. 1 tourist attraction in all of Central Asia and one of the main reasons I wanted to visit Samarkand. I couldn’t have asked for a better location. After I settled in to Bahodir I took a short stroll to get my first glimpse of the Registan. Tomorrow I would visit it in more depth.

I returned to Bahodir and reflected on the day’s events. While I may not have Flecker’s poetic talents, unlike Flecker, I could finally say that I had taken the golden road to Samarkand.

Sweet to ride forth at evening from the wells,
When shadows pass gigantic on the sand,
And softly through the silence beat the bells
Along the Golden Road to Samarkand.

We travel not for trafficking alone;
By hotter winds our fiery hearts are fanned:
For lust of knowing what should not be known
We take the Golden Road to Samarkand.