The holy city of Mashhad and the Haram-e Razavi

Posted on October 31, 2012 by briansworldtour 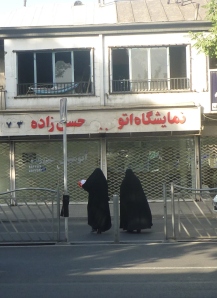 Local women in traditional black chador – they must be airconditioned!

The days were starting to slip away from me in Mashhad. I had been travelling in 35-40° heat almost everyday for 6 weeks now and I was finding it very difficult to muster the energy or the enthusiasm to go out sightseeing during the heat of the day. In any case, many places in Mashhad were shut from about 1pm until 4 or 5pm to escape the heat also.

The one place in Mashhad that I really wanted to see was the Holy Shrine of Imam Reza. The shrine was only a 20min walk from Vali’s. But the problem was we were still in the holy month of Ramadan and the usual daily crowds of thousands of people had become daily crowds of TENS of thousands. The only solution seemed to be to visit the shrine late at night.

And so it was that late one night Simon, the Farsi-speaking Ulsterman, and I walked up to the shrine and managed to join a crowd of Shia pilgrims and make it all the way in to the inner sanctum where the gold lattice cage covers the holy tomb of Imam Reza.

But who was Imam Reza and why is he so important I hear you ask. Read on.

Mashhad is the second largest city in Iran with a population of well over 3 million people and is the holiest place for Shi’ite Muslims in Iran. This is because Mashhad is home to the Shrine of Imam Reza, the eighth of the Twelve Imams of the Shia branch of Islam.

In 818AD in Sanabad (the original name for Mashhad) Ali al-Rida, or Imam Reza as he was better known, was poisoned by some of his enemies to prevent him from becoming the next Caliph in Baghdad. After Reza’s death, Sanabad was given the name Mashhad al-Rida as “Mashhad” means place of martyrdom in Arabic.

Imam Reza was buried beside Harun al-Rashid, the Caliph whose court in Baghdad is believed to be the inspiration behind “The Book of One Thousand and One Nights”. Over the centuries, Imam Reza’s burial place became the centre for pilgrimages by Shias and as the centuries passed the shrine became more elaborate and more ornate. Now the shrine is the central focus of a massive complex called the Haram-e Razavi. 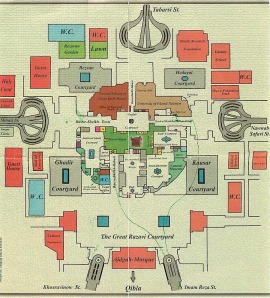 Simplified layout of the Haram-e Razavi. It is much more elaborate that this suggests!

The Haram-e Razavi complex consists of three distinct precincts. Once inside the main walls of the complex there is a series of large open courtyards that encircle the inner sanctum. These outer courtyards serve as public meeting places and are open to all – Muslims and non-Muslims alike.

Or are they? Not when you are with someone who speaks Farsi fluently and could pass for a local. 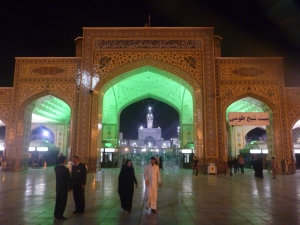 The Tabarsi St entrance to the Haram al-Razavi. Absolutely spectacular at night

Simon and I entered the Haram complex from the Shiraz Street entrance where I had to surrender my camera to the cloak room. We made our way across one of the outer courtyards to Sahn Jumhuri Islami, one of the inner courtyards where pilgrims pray before entering the shrine itself. Even though there were many ushers about our presence wasn’t questioned.

From the Jumhuri Islami courtyard we joined a large crowd of pilgrims entering the Dar al-Velayah chamber where men and women are separated before entering the shrine. It was here that I noticed the ushers were armed – not with Kalashnikovs or truncheons or tasers but with fearsome-looking rainbow-coloured feather dusters!

As we neared the main doorway to the shrine a heavily-armed usher (he had two feather dusters!) spoke briefly to Simon who replied in Farsi. I don’t know what was said but we continued on our way towards the chamber housing the tomb without any trouble.

By the now the crowd had become a scrum of hundreds of men all shoving forward using every means possible to further their position.  Anybody who has been caught in a rugby maul will know the sensation except there are hundreds of people all pressing forward, not a dozen! Eventually the surging mass of devout Muslims carried us towards the ultimate goal – the gold lattice cage that surrounds the tomb of Imam Reza.

Having reached the tomb I wasn’t sure what I was supposed to do so I just followed the pilgrims around me and held on to the gold cage for dear life as those behind me tried to wrestle me out of the way. After a short time I decided that my curiosity was not worth any broken ribs and released my grip on the cage. I was immediately swept away from the tomb like driftwood on an outgoing tide. 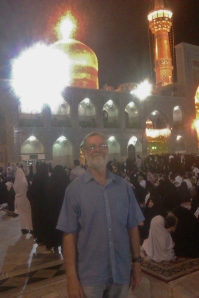 In Sanh Enqilab, one of the inner courtyards, with the golden minaret and dome of the Holy Shrine in the background.

Not surprisingly, Simon and I had become separated in the mass of human hysteria but were reunited in the Sahn Enqilab, another of the inner courtyards. This was my first experience of such mass religious fervour and I found it very interesting to observe at such close quarters.

It was now well after midnight and there were still tens of thousands of people wanting to visit the shrine! We continued our visit of the Haram in a much more relaxed manner in the outer courtyards away from most of the crowds.

After 2-3 hours at the shrine Simon and I decided to call it quits. I had seen the stunning architecture of the Haram but with few photos to show for it. I had witnessed the religious devotion of the pilgrims up close and personal. And I had become, somewhat inadvertently, a pilgrim to the Holy Shrine myself for a brief few moments.

I had seen enough. It was time to return to Vali’s and sleep on the events of the evening.