To Maku and the Turkish border

Posted on January 29, 2013 by briansworldtour

Due to Sam’s enthusiasm it seemed like I had been in Tabriz for a week but in fact it had been only three days. It was now time to pack the bike again and continue my journey across northern Iran to Maku – the last stop before the Turkish border. Tabriz to Maku was only 250km so it would be a relatively easy day’s ride. I could have made it to the border post at Bazargan as it was only another 30km up the road but I had learned that, wherever possible, it was usually better to approach border crossings in the morning rather than the afternoon. 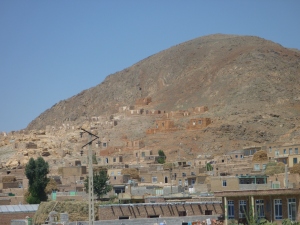 The often stark terrain of the Azarbayjan-e Gharbi region

After thanking Sam and Agdaz for their wonderful hospitality I said my good-byes. When I went out to the bike I found it was spotlessly clean. Sam had washed the bike for me! It was no longer covered in its patina of dirt and grime that it had acquired after three months of travelling through Asia.  And Sam continued his generosity by loading me up with food and drink for the journey.

I jumped straight onto the freeway that would take me out of town. It was felt good to get away from the mayhem of the Tabriz traffic. The countryside was quite desolate in parts. Often it was difficult to discern the mud-brick homes of the villages from their rugged, rocky surroundings.

A very friendly Iranian family invited me to join them for lunch.

It was another hot day but it was always a great feeling to be on the open road again and by early afternoon I was in Maku. I stopped in the main street at a local cafe to escape the heat and have some lunch. Immediately I was asked to join an Iranian family for lunch. Only one of the family spoke any English and that was fairly limited. But that was no problem. The father asked about my travels and he translated for the rest of his family. I asked the family for directions to a hotel but as they were not locals but travelling through to Orumiyeh they could not help me. Eventually I found the hotel I was looking for where the hotel staff even let me park the bike in their very grand, marble-floored foyer.

That evening, as I sat eating dinner in a local restaurant, it struck me that tomorrow I would be leaving Iran. More surprisingly, I realised I had only been in Iran for a total of two weeks. Was it really only two weeks since I had escaped the absurdity that is Turkmenistan? It seemed more like a lifetime ago.

I had entered Iran with a broad plan to visit many of the ancient historical sites. One was the most famous archeological site in the world – Persepolis, home to two of the great Achaemenid kings, Darius and Xerxes. My trip was also to take me to the fabled cities of Shiraz and Esfahan. Alas, it was not to be. Instead of being a trip through “Ancient Persia”, my travels had somehow morphed into a journey through “Modern Iran”.

From the manic outpourings of modern Shi’ite Islam in Mashhad to the relatively modern, but soulless, cities of Bognurd and Gorgan to the megacity of Tehran  to the ordinary suburban life of Tabriz, I had seen 21st century Iran in a way that I could not have anticipated when I crossed the rarely-used border at Sarahs.

But my time in Iran had been all too brief. I made a mental note to myself that Iran was the one country that I would love to visit again. Had I gained any new meaningful insight into Iran – one of the most-maligned countries in Western media? Not really, other than that the Iranian people were no different to any other people. They just wanted a home for their family, enough food on the table and hope for the future – the same as people all over the world. I strolled back to my hotel in the cool of the evening realising that I was going to miss Iran.

Tomorrow I would have to make the short 30km dash to the border at Bazargan and Turkey.

Breakfast was another of those strange combinations of Iranian and Western offerings. But it served its purpose of fuelling me up for the day.

As I approached the border at Bazargan, it occurred to me this would be my last “real” border crossing. Once in Turkey all the subsequent border crossings would be mere formalities. But I had been warned about the “helpers” on the Iranian side of the border. Their sole aim seems to be to help themselves to as much money as they can from unsuspecting tourists.

And sure enough, before I had even turned off the ignition, I was rushed by two or three would-be “helpers”.

“Give me passport and carnet!” one of the helpers demanded.

“Give me passport and carnet. I help. Much better for you.” the helper repeated.

“I help. You pay.” The helper was getting more agitated.

“You pay!” The helper was now yelling.

I found the real Iranian Customs officials. They couldn’t have been more helpful and courteous. I had the carnet for the bike cleared in about 20min. Getting through Immigration was equally efficient and polite. After about 45min I was free to leave Iran and crossed no-man’s land to the Turkish border.

It was chaos. A huge number of people were lined up at a single gate like a turnstile at the football. When my turn finally came the border guard asked for my stamp. I told him Australians don’t need a visa/stamp to enter Turkey, they buy them at the border. Again he asked for my stamp. I tried again to explain the situation and that I wanted to buy my stamp at the border. He insisted on seeing my stamp and sent me out of the queue.

I couldn’t help thinking about the irony of the situation I was in. After successfully negotiating all the “troublesome” borders in my travels through India, Pakistan, China and Central Asia I was now held up at the last and what should have been the easiest border.

Not sure what my next move was, I approached another uniformed Turkish official.

I explained that I had just tried that but was sent away.

“No. You buy stamp on other side. Then go to gate.”

“Other side?” Sensing my confusion he explained.

“Yes, other side. I show you.” The official took me back to the gate at the border where I had just been turned away and pointed to a building on the other side of the border. “You buy stamp there.”

Now I was really confused. Apparently, before I could cross the border into Turkey I needed to buy a stamp. But to buy a stamp I had to cross the border into Turkey to the office where they sold the stamp. Then I had to leave Turkey again so I could show my stamp to let me back into Turkey. With no other obvious option, I just pushed my way through the crowd to the gate and walked into Turkey – straight past the guard who had just turned me away five minutes ago. The guard looked at me as I went past without batting an eyelid.

I walked over to the building the second official had pointed out and eventually found the right window where I could buy my stamp. With the coveted stamp in my hand I walked back out of Turkey to the rejoin the queue but the locals all pushed me, apologetically, to the head of the queue.

When I presented my passport and newly-acquired stamp to the guard he quite happily stuck it in my passport and welcomed me to Turkey. Unfortunately though, I now had to go back through the very courteous and understanding crowd out of Turkey to retrieve the bike which I had to leave in the no-man’s land carpark while I sorted out the visa/stamp fiasco.

Back on the bike, with all the paperwork completed, I simply rode straight through the main road gate back into Turkey. Nobody stopped me or asked for any documentation. Finally both bike and I were in Turkey, officially. I counted that I had crossed the actual Turkish border gate five times in 15 minutes. Is that some sort of record?

After the Python-esque border procedures I couldn’t get away fast enough. I took off up the road as fast as an overloaded, 20-year-old BMW could – which, unfortunately, isn’t very fast at all. As I headed for Dogubayazit (unflatteringly called Dogbiscuit by some Western travellers) I realised that I wouldn’t have to worry about visas for the rest of my trip. Hallelujah!

My goal now was Erzurum, about 320km up the road. It would be my first stop in Turkey.