The Pamir Highway Part I: Sary Tash to Murghab

For the first time since crossing the Khunjerab Pass, the weather was very cold. Even though the homestay in Sary Tash was cosy it was still a bit too cool inside at night. Consequently I woke at about 6am, well before the family. Not knowing how to fill in my time until breakfast, I made an executive decision to start repacking my bike. Originally I had allowed two nights in Sary Tash but I had realised when I arrived there was really nothing to keep me in Sary Tash except vast amounts of vodka.

By 7am I was packed and ready to go and the family was only just starting to surface. Not wanting to waste any more time waiting for the homestay breakfast, I snacked on some dried apricots I had been carrying since Sost, two-day old naan and the last of my bottled water. I rode up to the servo, filled up the bike and headed for the Tajik border at the Kyzyl Art Pass, 45 km away.

Not the Pamir Highway.

After about 45km, there had been no sign of the Kyrgyz border post at Bor Dobo. Based on the direction of my shadow on the road and the position of the mountain range, I was convinced that I was heading along the wrong road. I stopped at some roadworks and asked if this was the road to Murghab. After looking at my map, the roadworkers assured me it was and pointed down the road. I continued for another 10km to a small village, all the time convinced I was on the wrong road. I found another gang of roadworkers and asked them if this was the road to Murghab. They perused my map carefully and confirmed I was on the wrong road. 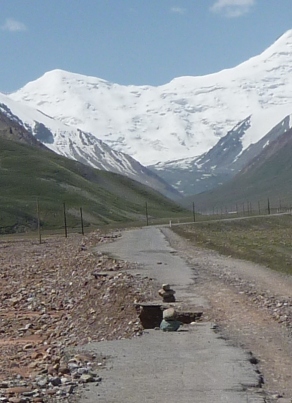 Yep, THIS is the Pamir Highway!

Damn! This was my first significant navigational error. I had no choice but to retrace the 55km back to Sary Tash and find where I had gone wrong. Just outside Sary Tash on the way back, I stopped at a minor road junction and asked an old man in an equally old stone building if he knew where the road to Murghab was. He immediately pointed to the minor side road. This was the Pamir Highway? To Murghab? He assured me it was. I had wasted almost 2hrs and 110km of fuel. After topping up the bike again (I wanted to have a full tank for the 235km trip to Murghab) I headed out of town for the second time that morning to the turnoff at the old stone building. The first 10-15km was not too bad but the road deteriorated rapidly after that. I couldn’t believe that this was a “highway”. Convinced I had made another mistake, I stopped and waved down a passing car. Yes, this WAS the Pamir Highway to Murghab. 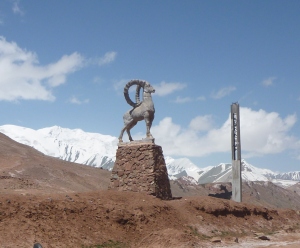 The Tajik border at Kyzyl Art Pass – complete with statue of the famous ibex.

I arrived at the Kyrgyz border post at Bor Dobo about 11:30am: Formalities took a staggering 15min and I only had about 15km to cover before I reached the actual border at Kyzyl Art Pass. The road to the pass deteriorated even further and it was back to a 1st gear crawl. Kyzyl Art Pass is quite high at almost 4300m but neither the bike nor I suffered any ill-effects from the altitude. Maybe the dried apricots worked after all – or the Diamox tablets.

A few kilometres after the pass I arrived at the border checkpoint where I was greeted warmly – firstly by the border police, then by the Immigration officers and finally by the Customs officers. All were very friendly and were very curious about the Australian travelling across Asia by motorcycle. The formalities were over in about 20-30min. And, as for the GBAO permit that I had had so much trouble getting in Islamabad – they barely looked at it. One officer who spoke a bit of English said it was not important and to forget about it.

Looking over Kara Kul to the stunning peaks of the Tanymas Ranges of Badakhshan.

From the pass the road quickly dropped down to the open plain but didn’t improve significantly. Around the beautiful lake at Kara Kul I stopped for a break and a bite to eat at a small homestay called Aigerim. After some naan and chai, it was back onto the bike to tackle the remaining 125 km to Murghab, including another high altitude pass – Ak Baital at 4650m.

The Chinese border fence just metres from the road

The road across the plain runs amazingly close to the Chinese border – sometimes no more than 5-10m from the bitumen. This does not correspond to any roadmap I had seen. It was only later that I learnt that the Tajik government had recently agreed to cede a large slice of its territory to China in exchange for Chinese financial backing for a variety of as-yet uncompleted infrastructure projects and assorted dubious trade deals. This was not received well by the locals as most are ethnically Kyrgyz and not Tajik at all.

The road deteriorated again as I climbed up to Ak Baital Pass, made even worse by some recent showers of rain. It started to get cold and I could see the remnants of the winter snow in some of the sheltered side valleys. Once over the pass it was only 75 km to Murghab but the road was a potentially dangerous mixture of half-decent bitumen and badly corrugated goat track with patches of sand thrown in for good measure. After another 2-3hr crawl, mainly in 1st and 2nd gear with the occasional kilometre or two in 3rd, I arrived in Murghab – the closest thing to a town I would see until I reached Khorug many days ahead. 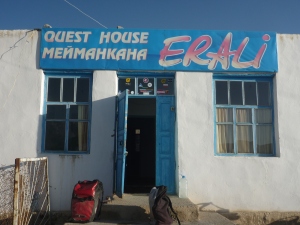 A number of people had recommended a particular homestay but after a fruitless 10-15min search around the backstreets of the bazaar I gave up and decided on a guesthouse I had seen on the way into town. Erali’s wasn’t a “Guest House” but a “Quest House” – the sign said so. Appropriate really, as reaching Murghab from any direction is a bit of a quest.

Despite my early morning navigational faux pas (I will put it down to the lack of caffeine!) and the sometimes murderous state of the road, I had made reasonable time so I still had an hour or so to have a quick look around Murghab before sunset. It seemed a pleasant, if unkempt, little town and I immediately decided that I would spend two nights at Erali’s. 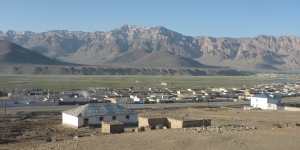 Murghab is quite picturesque – if viewed from a distance.

This turned out to be a better decision than I could have hoped. Even though Murghab didn’t have an ATM it did have a real bank where I could change my monopoly money Kyrgyz som for Tajik somoni. Not only that but it had an information centre where I could access the internet. Unfortunately for me all the websites were in Russian as was the keyboard. However, with a little bit of perseverance and lots of mistake, I was able to communicate with the outside world – I think.

So I had a lazy day in Murghab doing not much at all, a well-deserved rest I reasoned.

There was a group of four Swiss cyclists staying at Erali’s as well. I had already passed a handful of overland cyclists on the road from Sary Tash – including one complete nutcase riding (?) a recumbent bicycle. Given the atrocious road conditions and the lunatic car and truck drivers, he would have to be a prime candidate for a Darwin Award.

The four intrepid Swiss cyclists with Erali’s family about to leave for Sary Tash. And I thought I was doing it tough.

The four Swiss riders were heading in the opposite direction to me and were resting up in Murghab for a few days before tackling the road north to Sary Tash, Osh and then Bishkek. They were very interested in my opinion of the road to Sary Tash. And I was equally interested in their opinion of the roads that lay ahead for me along the Pamir and Wakhan Highway. The two couples made very congenial dinner companions and we discussed the relative advantages and drawbacks of our respective choices of two-wheeled vehicles. Riding a motorcycle overland is demanding enough. I can’t even begin to imagine how difficult it must be when you have to provide your own horsepower as well. The stamina, the dedication and the sheer determination required to travel thousands of kilometres overland by bicycle is beyond my comprehension. They have my utmost respect. Except, of course, for Mr Run Over Me Now on his ridiculous recumbent contraption.

After the Swiss quartet left for Sary Tash, they were replaced by a lone Japanese traveller. I had met up with him briefly in Sary Tash. The vast majority of overland travellers usually have a clear image of what their journey is about – some even have their route set out in a spreadsheet! However, the young Japanese guy seemed very naïve and gave the distinct impression of being slightly disoriented as he drifted his way across Asia. Each to their own, I suppose. I just hope he gets to where he wants to, safely.

Erali’s Questhouse had provided a very comfortable and hospitable stopover for me but my journey along the Pamir and Wakhan Highways had really only just begun. It was time to turn my attention to the next leg. The plan for tomorrow was to travel the 110km to the little village of Alichur by lunchtime and then take the turn-off onto the Wakhan Highway to Langar – a further 130km. This made a total of a mere 240km for the day. A modest goal I estimated.

A dramatic change in the weather would put an end to that plan before I had even reached hallway.

3 thoughts on “The Pamir Highway Part I: Sary Tash to Murghab”