Posted on August 5, 2012 by briansworldtour

With a relatively modest itinerary for the day, I enjoyed a leisurely homestay breakfast of eggs, naan, chai and lollies. Lollies were served at every meal at every hotel/guesthouse/homestay I stayed at in Central Asia. Good for a quick hit of energy and does wonders for the demand for gold false teeth. Initially, I was taken aback by people flashing 24ct smiles – something which I found oddly reminiscent of an old James Bond movie.

Yet another photo session – 60 seconds out of town

By 8:30am I was on the road. By 8:31am I was stopped at the police checkpoint on the way out of town. After my passport details were recorded and the usual curiosity about the bike the inevitable photo session began. By 9:00am I was back on the road again. I didn’t really mind as it gave the pitiful excuse for a sun another 30min to try to start generating some heat – without any noticeable success.

The route now known as the Pamir Highway has been existence for many centuries as it was part of the network of trade routes that linked Persia and China. Today, the Pamir Highway forms part of the M41 – originally a military road constructed during the Soviet era along the former USSR’s sensitive border regions with Afghanistan and China. Very little remains of the original bitumen surface as road maintenance since the Russians left has been non-existent. (Sometimes Central Asia reminds me of the scene from “The Life of Brian” where Reg from the People’s Front of Judea asks what have the Romans ever done for us – just substitute Russians for Romans. Apart from the roads, the electricity, the television, the water supply, the shops, telecommunications, education, health care and vodka the Russians don’t appear to have left much of a legacy at all in Central Asia!)

The day was to be broken into two stages. Murghab to Alichur was about 110km. Alichur to Langar was about 130km. Both stages had a pass to cross at over 4000m.

At first the road from Murghab to Alichur was quite good and I thought it would be an easy morning’s ride. But as I approached the Najzatol Pass (4300m) the road surface steadily deteriorated with many potholes and washed out sections. The climb to the pass brought not only a change in the road but a dramatic change in the weather – for the worse. What had started as a cool morning in Murghab had almost become bearable while riding, given the wind chill factor. 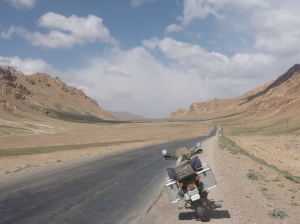 Entering the Alichur Pamir and heading straight for bad weather

However, the Najzatol Pass didn’t drop down steeply on the other side like the previous passes. The pass was the entrance to the Alichur Pamir – a pamir being a long, broad, flat valley or plateau that sits between two high mountain ranges. A characteristic of a pamir is that it can act as a huge wind tunnel. And this is exactly what I encountered as I crested the pass. The wind became much stronger and bitterly cold, and the cloud cover blocked out the sun’s pathetic attempt to provide any warmth. I stopped to put on a couple of extra layers of clothes and change to my ski gloves and liners. Thankfully I only had another 50km to go to Alichur. But despite wearing 5 layers of clothes on top and two pairs of gloves I found myself shivering with the cold.

In the middle of nowhere, about 10km before Alichur, I noticed a strange sign nailed to a post beside the road near a lone mud brick house. The sign read “white fish”. Not only that, but there were two motorcycles parked outside the house. By now my hands were almost frozen around the handlebars and I was looking for any excuse to get off the bike and out of the freezing cold weather.

I pulled up beside the two bikes and noticed they were BMW F650’s loaded up for overlanding. Inside the house I met my fellow overlanders, Harry and Linda, a South African couple travelling around the world and heading for Murghab. They had come from the Wakhan Valley and were also trying to escape from the frigid winds. I joined them for a meal of chai and “white fish” – tasty and nourishing but coral trout it was not. We sat and chatted for an hour or so as we all tried to get some feeling back into our hands.

Harry and Linda at the “White Fish Inn”

As had become the norm we exchanged opinions about our respective roads ahead. The couple had about another 40km of this weather to endure before they dropped down over the pass into the relative warmth of the Murghab valley. Based on their advice, I quickly decided that there was no way I was going to make it to Langar in one day. Apart from the weather, the road after the turn-off apparently deteriorated badly and there was absolutely no way I was going to tackle 130km of bad dirt when my concentration was severely compromised by the freezing winds.

After exchanging email addresses with the couple, we set off in our opposite directions – they in search of warmth in Murghab, me in search of a warmth in a bed 10km up the road in Alichur. Soon, but not soon enough, I reached Alichur and found the well-known “Marco Polo Homestay”. Unpeeling myself off the bike, I asked the owner for a room. He immediately offered me some hot chai and naan to revive my flagging spirits. It was only 1pm.

The rest of the day was spent thanking my lucky stars that I made the decision to stop as the cold wind gusted strongly all afternoon. For me, riding for another 3-4 hours over bad roads in those conditions would have been verging on suicidal. I was more than happy to rest and hope that tomorrow would bring more benign weather.

The homestay was the most basic I had stayed at so far and the food was even more basic fare. Dinner consisted of a bowl of grey sludge made with something like semolina or tapioca and goat’s milk, some three-day old naan and another bowl of goat’s milk to wash it all down. It was the most unappetising meal I had ever seen. Out of courtesy to my hosts I forced it down but it didn’t sit well in my stomach. I went to bed early, regretting my decision to finish the meal.

As I lay awake pondering the consequences of my diabolical dinner I reassessed my travel plans for tomorrow. Hopefully I would be able to cover the 130km to Langar, including another 4000m pass at Khargush, without too much drama. Then in Langar I would be able to rest overnight and my journey along the spectacular Wakhan Valley could begin.