Posted on August 14, 2012 by briansworldtour 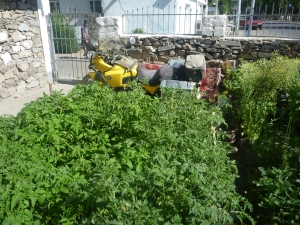 There’s a BMW growing in the tomato patch!

It turned out that Hajbi wasn’t the owner of the Chorbogh Inn. The house was actually the home of Hajbi’s brother who was working overseas for 12 months. While he was away the family had decided to put his home to good use and turn it into a guesthouse to earn some much needed money – preferably US dollars!

I was the only foreign guest at the Inn. All of the other guests were Afghanis. Khorog, like Ishkashim, was one of the common border crossing for Afghanis to enter Tajikistan and as it was the weekend of the annual festival there were many Afghanis in town. Hajbi spoke very good English and was very “westernised”. He was very happy to have an English-speaking guest to practise his English. He also commented that he was happy that he had a guest “who knew how to behave”. He also commented that the Afghanis “didn’t know how to behave” and he had taken it upon himself to teach them “proper manners”. I suspect his efforts would be in vain. 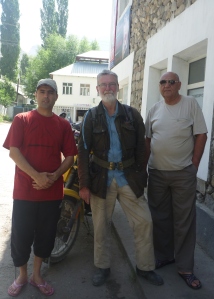 Hajbi, yours truly and some random who decided he wanted to be in the photo!

After extracting my bike from the tomato patch there was the obligatory photo session. Today some random decided he wanted to join in the photo. After some chit-chat in “Pamirilish”, Mr Random was able to give me, via Hajbi, some very useful information about the condition of the road to Kala-i-khum. More importantly though he had just come from Dushanbe and advised me not to take the Pamir Highway (the direct northern route) from Kala-i-khum to Dushanbe. The southern route via Kulyob was about 80-90km longer but would take about the same time as the northern route which was in very bad condition near the Saghirdasht Pass (3250m). As I had seen enough bad roads over the last few weeks, I didn’t feel like tackling any more if I didn’t have to.

Armed with this new information, I revised my route yet again and decided to make an easy day of it and just ride to Kala-i-khum – about 240km away. On the way out of town, I filled up the bike at the first proper petrol bowser since the ludicrous “safety” episode in Kashgar in China a couple of weeks ago. 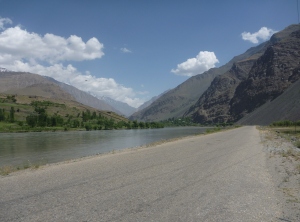 A much more gentle Pyanj River flowing right beside the Pamir Highway. That would soon change.

The Pyanj River north of Khorog was a much more placid affair. Gone were the raging torrents of yesterday – to be replaced by broad reaches gently flowing directly beside the road. In some sections the river was so close to the road you could dangle your feet in the water to cool your heels.

The first 65km of the Pamir Highway north to Rushan, near the entrance to the Bartang Valley, was relatively easy riding.  Just west of Rushan, the Pyanj opened out into a large shallow lake – giving no hint as to how its character would change again so quickly and so dramatically.

Sometimes the road had to go under the cliff face! 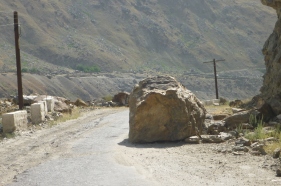 Just in case I had forgotten about landslide rubble!

After the lake, the valley narrowed and the river again turned into a muddy brown washing machine. The road clung desperately to the side of the cliff face and I was reunited with the joys of landslide rubble – some of it big enough to crush a car!

This stretch of the Pamir Highway had very few villages on the Tajik side. However there were many small villages on the Afghan side. This highlighted the lack of common sense by the map-makers of Tsarist Russia and Great Britain when these borders were finally delineated in the 1890’s.

With few villages to capture my interest, I turned my attention to the geological features. I soon discovered that this stretch of the Pamir Highway would make an ideal excursion for Year 12 Earth Science. Everything you ever wanted to know about geology in one rockface. I would hate to have to do the risk assessment paperwork though. 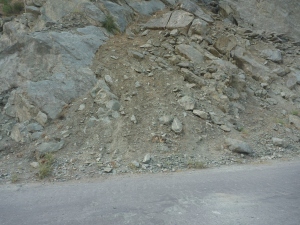 Spot the dog! You may have to click on the photo to enlarge it to find the sad looking canine

At one of my many photo stops I looked around to see a lonely dog resting on the steep cliff face. I wondered why it had chosen such an uninviting place to rest.

Slowly, ever so slowly, the odometer turned over the kilometres until eventually I arrived at the pretty little town of  Kala-i-khum. It has very little in the way of tourist  accommodation so I found my way to the MSDSP guesthouse. The MSDSP is the Mountain Societies Development Support Project which is an organisation funded by the Aga Khan Foundation and aims to provide basic services (such as health care, education and economic opportunities) to the local Pamiris that are not being provided by the various levels of goverment. 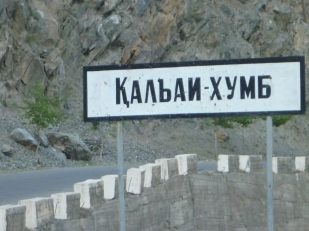 Ever wondered how to spell Kala-i-khum in the Cyrillic alphabet?

The MSDSP guesthouse was 1-2km west of town and as I strolled back into town to find somewhere to eat I noticed the road sign announcing Kala-i-khum. It was in the Cyrillic alphabet but I realised that I could just about understand it. Over many days of riding, with the constant exposure to Cyrillic roadsigns – combined with a little knowledge of the Greek alphabet from science – somehow I had subconsciously absorbed much of the script. Not that it helped much if you didn’t know what the word meant!

The accommodation at the MSDSP guesthouse was very basic but the family who ran it were very humble and sincere people who were prepared to provide any help to tourists. Like many places in the Pamirs tourism here had almost completely disappeared in the wake of events in the south of Afghanistan.

But Kala-i-khum was just an overnight stop on the way to Dushanbe and my dates with the embassies of Iran and Turkmenistan.  Tomorrow I would have to decide whether to take the shorter northern route over the pass or the longer, but more scenic southern route via Kulyob. As events unfolded I would have more pressing issues to contend with than scenic beauty.

One thought on “The Pamir Highway Part IV: Khorug to Kala-i-Khum”