The Wakhan Highway: Langar to Khorug

Posted on August 13, 2012 by briansworldtour

The plan for the day was to ride about 110km along the Wakhan Highway from Langar to Ishkashim and visit the large market held every Saturday. From Ishkashim it was only another 100km to Khorug. The Wakhan Highway is no more a highway than the Pamir Highway is. Most of it is rough “jeep track” with the added bonus of the return of landslide rubble. However the views across the Pyanj River to Afghanistan were often breathtaking.

Crossing the Khargush pass yesterday also meant crossing another ethnic divide. Since entering Tajikistan from Sary Tash, the majority of the locals had been Kyrgyz. However, once over the Khargush Pass, I had left the Kyrgyz to their high altitude pastures. Now, the locals were mainly Pamiris who had more in common with their Wakhi neighbours across the valley in Afghanistan.

After a good night’s sleep, I wondered what sort of breakfast awaited me. Thankfully, breakfast was much more recognisable (and nourishing) than yesterday’s disaster – black coffee, eggs, naan and, of course, a bowl of lollies. As I was packing the bike after breakfast Ëdgar’s young son decided he wanted to “help”.

Ëdgar was a very gracious and hospitable host – his son, not so much!

At first I tolerated his annoying behaviour – fiddling with switches, pulling on cables and wires. But he soon became a truly irksome little brat. This was the first time in my trip that anybody had been so thoroughly obnoxious. Eventually, I had to tell him to piss off. He spoke little English so I doubt he understood the words but he got the message and disappeared into the scrub – only returning for a parting photo with his very hospitable and gracious father.

Bike packed, photos taken I continued my journey along the Pyanj River. The road was slow going but now it didn’t seem to matter anymore. I had developed a routine where I simply rode for one hour before stopping for a drinks break, a pitstop or just to get off the bike to stretch my legs. Whether I had covered 30km or 60km was no longer important.

Pitstop with a view. Looking over the Pyanj River toward the towering Hindu Kush Range. 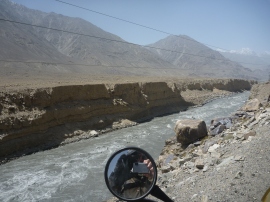 The Pyanj River – Afghanistan on the left, Tajikistan on the right. The photo can’t capture the speed and violence of the river.

Yesterday, when my route joined the Pyanj River it had been an icy green-grey. But the further west it flowed the more the colour changed until it gradually became a silt-laden dirty dark grey. And as the valley narrowed the more violent the river became.

The valley was dotted with small villages with unpronounceable names like Vrang, Yamg, Zumudg or Shitkharv. Typically these villages were built along a poplar-lined main street and were home to small market gardens that flourished in the fertile stretches where the valley opened up and the river slowed to a more gentle pace. Just 100m away, on the opposite bank of the Pyanj, many small Afghan villages were clearly visible all along the Wakhan Highway.

One of the many villages on the Afghan side of the Pyanj.

I made good time and arrived at Ishkashim at lunchtime. But this was not good timing. The little town was packed with the crowds of locals leaving the morning market. There was a fair bit of carpark rage going on as everybody tried to untangle their cars from the chaos of the streets. I decided not to join the mayhem and rode straight through and stopped outside for a quick lunchbreak of water, naan and dried apricots.

Then it was back on the bike for the last 100km dash to Khorug. It arrived after only a couple of hours leaving me plenty of time to find a hotel – which was just as well because I had arrived on the weekend of Khorug’s annual festival and most of the accommodation was booked out. After the second unsuccessful attempt I was pointed in the direction of a new guesthouse right in the centre of town next to the bridge over the Gunt River.

The Chorbogh Inn turned out to be a real find. The owner, Hajbi, was very welcoming and his homestay was several steps above what I had become used to since entering Tajikistan. I spent a very enjoyable two days in Khorug taking in the local festival which was in the park right beside the Inn.

My journey along the superbly remote Wakhan Highway had come to an end. Come Monday morning it would be time to pack up again and rejoin the Pamir Highway as it continued its serpentine path beside the Pyanj to Kala-i-Khum and eventually Dushanbe.