The black hole of Dushanbe: Days 1 and 2

Posted on August 26, 2012 by briansworldtour

The owner of the very trick BMW was an Austrian guy called Markus or Mex as he preferred to be called. His BMW was heavily modified with very few parts left in their original state. It was a work of technical genius, far beyond my level of mechanical or riding expertise. Mex, and his wife Moni, and I were to become good friends during our many days together in Dushanbe. They also had bike problems. The clutch on Moni’s bike had failed and they were waiting for a new clutch plate to arrive from Germany via DHL.

I had three major tasks to complete in Dushanbe. Despite the urgency of fixing the bike’s electrical problem I had to give priority to getting my visas for Iran and Turkmenistan. I could work on the bike while I was waiting for the visas. In direct contradiction to what I had read on many websites, it was NOT possible to get my Turkmen transit visa without getting the Iran visa first. So my first port of call on Day 1 was the Iranian Embassy. With a bit of Tajiklish I managed to get a taxi down Rudaki for what was to be the first of many, many trips. At the embassy I was relieved of US$185 and told to come back on Tuesday (it was now Thursday). This meant I now had several days to concentrate on fixing the bike.

Back at the Adventurer’s Inn Mex and put our combined knowledge of BMW electrical systems to good use. I took the seat and tank off the bike to get better access to the electrical components. The starter relay was still making its pathetic buzzing sound and at first I thought this was the problem. Mex suggested we check all the connections to eliminate any continuity problems. We did find one dodgy connector but that was in the ignition circuit so that wasn’t the cause of the problem. I fixed that and continued the search for the fault. Mex had a little pocket multimeter, so I checked the voltage in the battery. It read 10.5V. It should have been 12.8V! This meant that only 5 out of the 6 cells were working. The battery had dropped a cell. Whether it was from the constant hammering from the roads or some other reason I will never know. The battery was only just over 12 months old before I left. And as I usually get 3-4 years out of a battery I saw no reason to replace it for a 4-5 month trip. 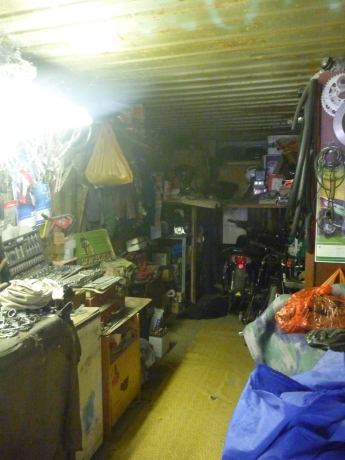 All Australian (and Russian) boys need a shed!

Mex and I were confident we had found the cause of the problem. The next step was to fix it. This turned out to be more difficult that finding the problem. There was absolutely zero chance of finding the correct battery in Dushanbe. The best I could hope for was to find a small car battery that would physically fit in the battery carrier under the seat. Mex again came to the rescue. He knew a guy in Dushanbe who had a motorcycle workshop. Well, workshop may be a bit of a exaggeration. More like a shed. No matter, Mex took me to meet Andre to see if he could help. Andre was Russian and spoke very little English but he spoke very good motorcyclese. After a bit of mime and handwaving he told me to come back tomorrow (Friday) and he would have a new battery for me. I couldn’t thank Andre enough.

So far, Day 1 had been an outstanding success. My Iran visa application had gone ahead without a hitch and the electrical fault had been found and a solution was in the pipeline. Mex and I returned to the Inn where we enjoyed several well-earned pivas – the ubiquitous, and suprisingly good, Russian “Baltika 7”.

Day 2 dawned and I woke up feeling much better about my situation. Everything was back on track or least getting back on track. After lunch Mex offered to pick up the battery from Andre’s workshop as he had to go into the DHL office in the city to check on his parcel. Later that afternoon Mex and Moni returned. The good news was they had my battery. The bad news was their parts from Germany still hadn’t arrived at DHL. They had already been waiting 5-6 days for a 3-day express delivery. I felt a bit bad about getting my battery in 24 hours while they were still waiting for their parts after nearly a week.

Mex and I fitted the new battery. It had the perfect footprint but was about 30mm taller than the original battery. This meant I had to find a new home for the toolbox. Not only that but the earth lead was now too short to reach the negative terminal. I wandered up the road to a nearby workshop and scrounged some bits of metal and some extra nuts and bolts and ….Voila! All was good. I hit the starter button and my bike sprang to life. It was as good as winning Lotto!

With Mex’s help I had found and fixed the electrical problem in 48 hours. I had to pinch myself to make sure it was true. I could sit back and relax and enjoy my stay in Dushanbe. There was nothing I could do now until Tuesday when I could pick up my Iran visa and then apply for my Turkmen transit visa.

I had a whole weekend to do nothing. They would be the last stress-free days I had in Dushanbe.