Posted on August 27, 2012 by briansworldtour

Thinking that all my problems were solved or, at least under control, I spent the whole weekend catching up on domestic chores. It had been a long time since I handwashed clothes in bucket. But I had all the time I needed. And with free WiFi at the Inn I was even able to catch up with how the Cowboys were going in the NRL. On Saturday morning I started the bike just to make sure everything was still OK.

They like their monuments big in Dushanbe! That’s me at the base of the statue.

Mex and Moni had invited me to join them on a weekend ride with Andre and some friends into the mountains just outside Dushanbe. But after the last few days, all I wanted to do was to sit back and not have to think about anything. Over the weekend I got to know some of the other guests at the Inn. And a very diverse bunch they were. There was an English cyclist, a young English paraglider, three Israeli trekkers, a Kiwi and French couple, a French cyclist from Toulouse and a number of others who came and went over the weekend.

There were several lazy trips down Rudaki to play tourist and take photos or simply to have shashliks and a few Baltikas for lunch beside the fountain. All in all in was a very pleasant weekend. I felt re-energised and ready to take on the next stage of my trip.

Come Monday morning, however, all that equanamity would be nothing but a memory.

One of the other guests, Will,  had a small problem with his Tajik visa so I had offered to give him a lift on the bike down Rudaki to the city to get it sorted out. However, when I went  to start the bike … nothing! F..k! I couldn’t believe it. Just when I thought the problem was fixed it had returned. Maybe it wasn’t as simple as a dead battery. Maybe it was a short to the frame somewhere  that was slowing draining the battery. That would be a much more difficult and time-consuming problem to find and fix.

With the help of Will, I pushstarted the bike and we rode into town to Andre’s workshop. I tried to explain the problem in sign language. We took the  brand new battery out and Andre checked it on his high-tech battery tester. Yes, it was flat. But more importantly it wouldn’t accept a charge. The new battery was a dud! Andre said he would try to find another battery but it may take some time as the first new battery was the only one of that size in the shop.  F..k! I decided to leave the bike at Andre’s until he could find a second new battery.

While I was in town I decided to see if , by some miracle, my Iran visa was ready a day early. The Iran embassy was a short walk from Andre’s place and, after a short wait, the consulate official pulled my passport out of his pocket complete with the all-important visa. At least I had had one win today. Immediately, I caught the No.1 trolley bus back up Rudaki to the Turkmen Embassy to get my application for the transit visa underway. I knew the embassy closed at 12:30pm for lunch so I was happy when I arrived at 12:10pm. I was not so happy when the guard told me the embassy was closed for lunch. I pointed to sign showing the opening hours and then pointed to my watch. The sour-faced guard just shrugged and said “Closed” and raised three fingers – to come back at 3pm. F..k! There’s was nothing I could do but walk back the the Inn, which was only about 1-2km away, and return later in the afternoon.

I walked back to the Turkmen Embassy and arrived about 2:45pm to join the queue of people waiting. Promptly at 3pm, nothing happened. At 3:15pm, still nothing happened. The guard, Mr Sour-Face, seemed to be enjoying everyone’s frustration. When the Embassy opened just before 3:30pm the official, who was very helpful and spoke very good English,  told me that afternoons were for issuing visas not applying for visas. I told him that I was there in the morning but the guard had said it was closed. The official said I would have to come back tomorrow between 9:30am-12:30pm. F..k! Another waste of time! 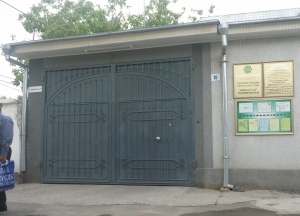 The Embassy of Turkmenistan – in an alleyway in the backstreets of Dushanbe. I enjoyed it so much I ended up going there seven times before I finally got my visa!

Next morning (Tuesday) I walked back to the Turkmen Embassy at 8:45am to be greeted yet again by Mr. Sour-face. Each time I went there, he would ask me where I was from. Each time I would answer “Australia”. And each time he would reply “America”. And each time I would repeat “Australia”! During the long sessions spent waiting on the footpath outside the embassy, I had the misfortune to be able to observe the demeanour of this sad example of humanity. He was a classic case of “a litttle man with a big gun”.

Evetually my turn arrived and I was finally shown into the consular office where I spoke to the same official as yesterday. Again he was very polite and helpful. He helped me fill out the application form for the 5-day transit visa and told me to come back in one week, next Tuesday. I explained to him that my Tajik visa expired on Tuesday (due to a mistake by the Tajik Embassy in Islamabad all those weeks ago) and asked him if it was possible to pick it up on Monday. He said he would see what he could do but couldn’t promise anything. I had to be happy with that. At least he was trying to help, unlike the nasty piece of work outside the gate.

I walked back to the Inn to take stock of my situation. Of the three tasks I had to achieve in Dushanbe, only one had been completed – my Iran visa. My Turkmen visa was under way but I probably wouldn’t get it until next Tuesday – the day my Tajik visa expired. This meant that I would have to pick up the Turkmen visa from the embassy and head straight for the Uzbek border which, fortunately, was only about 75km or about one hour’s ride away. As for the bike battery, it was a case of one step forward and two steps backwards. There was nothing more I could do until Andre tracked down another suitable battery somewhere in Dushanbe.

After six days, Dushanbe was beginning to feel like a open prison. I was free to go anywhere, I just couldn’t leave. But I wasn’t the only one stuck in Dushanbe. Mex and Moni were still waiting for their parts from DHL, Will was still trying to sort out his problem with his Tajik visa and many of the other guests at the Inn were also waiting for visas for various neighbouring countries.

It seemed like we had all been sucked into a black hole from which none of us could escape.