The black hole of Dushanbe: Days 7-9

Posted on August 28, 2012 by briansworldtour

How does one fill in a week in Dushanbe? With great difficulty, as I found out.

Dushanbe is not a city that has a glorious history spanning many centuries like its very close neighbour, Samarqand, just over the border in Uzbekistan. Until the Soviets arrived in the 1920’s it was nothing but a dusty little market town. Dushanbe means “Monday” in Tajik, the day the weekly market was held. The Soviets decided to make Dushanbe the capital of the Tajik SSR when they carved up Central Asia into the jigsaw puzzle that it is to this day. Consequently, there are no architectural wonders like the Registan in Samarqand or the Ark in Bukhara.

After the Soviet Union collapsed in 1991 Tajikistan, in general, and Dushanbe, in particular, have struggled to find their place in the world. Since independence it has effectively been a one-party state with an all-powerful president/dictator. The evidence of this is everywhere in Dushanbe. Every public building, and there are lots of them, carry huge banners of  President Emomalii Rahmon playing with children, mixing with sports stars or talking to miners. The Post Office even gives away free postcards with his picture on them!

All this leads to a confused architectural style that combines 1970’s Soviet drabness with 1990’s meglomania and a touch of Las Vegas trash thrown in for good measure. Fortunately Dushanbe does have some beautiful parks and fountains (when they work) to break up the bad taste.

But I digress. When I wasn’t out roaming up and down Rudaki or having yet more shashliks and Baltikas for lunch beside the fountain I spent my time chatting with the ever-changing cast of people staying at the Inn. The Israelis trekkers had gone up to the Fan Mountains for three or four days but had now returned for a few days before going their separate ways. A whole bunch of people on bicycles turned up all heading for different places. It was getting difficult to remember who was who and who was going where.

Mex and Moni finally got there parts from DHL and made their escape from Dushanbe while many of us just kept waiting for our turn to bolt.

the bad…….Presidential Palace or Las Vegas casino? You decide. 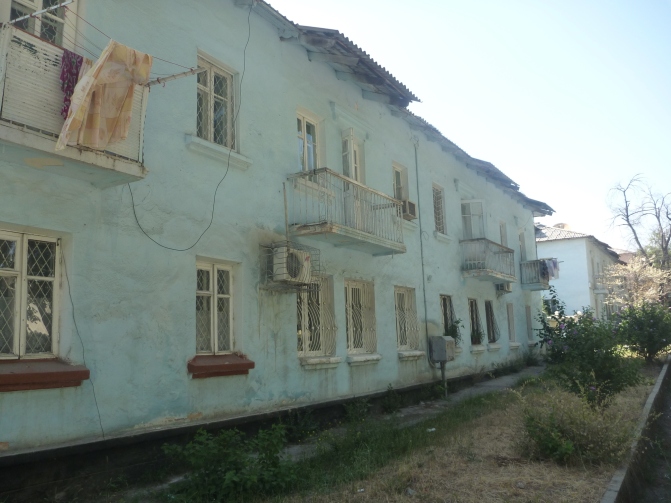 ……and the ugly! Lots of old Soviet apartment blocks on Rudaki Prospekt – the main street of Dushanbe. 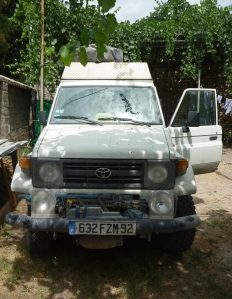 Jean’s Troopie. Jean was a serious 4WD enthusiast and was very envious of the high quality of Australian after-market accesories that were unobtainable in France

One day I heard the unmistakeable sound of a big single-cylinder trailbike pull up outside. The rider was a Spanish guy, Marcos, who had ridden all the way from Switzerland.  He was followed soon after by a French guy, Jean, driving a Toyota Troopie – the first real 4WD I had seen. Marcos and Jean had met up along the way and had deciced to travel together. They were heading for the Pamirs, then Kyrgyzstan and China but were held up by road closures. Eventually they decided to take their chances and headed for Khorug. Will finally got his visa problem sorted out and got a lift with Jean in his Troopie to Khorug where he was planning to cross into Afghanistan. He was to meet up with a film crew making a documentary about the elusive and endangered snow leopards in the remote upper Wakhan Valley.

When I hadn’t heard from Andre by Thursday lunchtime I decided to take yet another bus ride down Rudaki. When I got to Andre’s place he wasn’t there but his boss/workmate, Alexei, told me he had just gone to pick up the second new battery. That meant another wait overnight while the new battery was charged. I asked Alexei what time I should come back tomorrow and he said 1pm.

1pm Friday couldn’t come soon enough. Yet again I made the trip down Rudaki to Andre’s shed. When I got there Andre had the battery fitted and the bike was ready to go. I hit the starter button and the engine sprang  back into life. I had already paid for the battery but when I tried to give Andre some money for his labour he would not accept a single somoni. I tried several times to get him to accept something but he refused. I even tried leaving on his bench but he found it and gave it back to me just as I was about to ride away.

With the battery problem fixed, hopefully for good this time, I had two jobs down and only one to go – to collect my Turkmen transit visa. If I was lucky I might be able to pick it up on Monday and have a leisurely ride to the Uzbek border on Tuesday. If not, Tuesday was going to be anything but leisurely.