A day in the life of the real Turkmenistan

Posted on October 6, 2012 by briansworldtour

As I rode back down the road I had just ridden up not more than 30min ago, I began to wonder just what the consequences of my split-second decision would really be. If nothing else it would answer my question about what were the ordinary people of Turkmenistan like.

To be honest, the little town of Sayat could only be described as “nondescript”. It was a small market town for the surrounding area with no outstanding physical attractions. But, as in all such places around the world, the generosity of spirit of its people more than make up for any perceived lack of beauty.

At Bahar’s home I was welcomed like a long-lost relative. The family home was full as there was to be a wedding in two days’ time. Initially I was unsure about intruding on such an important family occasion but everyone assured me that “the more, the merrier” was the case and I was immediately made to feel at ease. Shortly after arriving the endless lunch began and every family member went out of their way to make sure I was fed, watered and comfortable. This was a family that did not know me one hour ago! 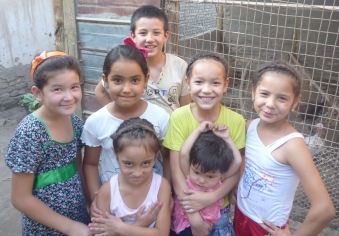 My constant companions in Sayat. At the back is Eziz, the only boy. Eziz adopted me for the day.

It turned out that both Bahar and her mother, Rosygul, were both English language teachers and were keen to practice their English with a native speaker. Rosygul was actually retired but still ran extra English classes for students after school. There was also a lot of children belonging to various relatives staying at the house and both Bahar and Rosygul encouraged all of them to practice their English with me as well.

So for the next 24 hours I became like the Pied Piper – continually surrounded around by a gaggle of giggling children, all keen to show me their little piece of paradise .

One of the children in particular, Bahar’s nephew Eziz (the only boy!) took it upon himself to look after me during my stay with his extended family. He also bestowed upon me the temporary honorific of “Baba”, pronounced more like “Bawa”, which means grandfather in many Turkic languages. I certainly was honoured but it did make feel just that little bit older. Both Eziz’s real Babas were there and they were both in their seventies!

The first thing Eziz (who was about 10) wanted to do was to take me for a walk down his street to show me off to all his friends. And I was happy to oblige. I found it incredibly therapeutic to forget about all the hassles with border posts, money changing, rude and unhelpful hotel staff and just enjoy being with ordinary people again. It was like life was simply normal again.

Eziz showed me the local gardens, the local soccer field and the local pumping station where one of his Babas worked – all done with a touching mixture of great pride and humility. After that we visited one of his Baba’s vegetable patch where we picked fresh tomatoes and cucumbers for the evening meal. Finally Eziz wanted to show me his “birds”. I wasn’t sure what this meant but the “birds” turned out to be chickens so I taught him to call them “chooks”, like a real Australian. 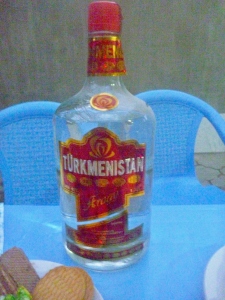 And no family dinner would be complete without a 2L bottle of the local vodka!

Back at Bahar’s home preparations were in full swing for the evening meal – a small get-together of about 10-15 people before the rest of the family turned up tomorrow for the wedding on the following day. As per usual the table groaned under the weight of the many dishes – all freshly prepared that afternoon.

Of course there were many toasts throughout the dinner and I returned the compliment by making a toast to the entire family who had adopted me for the day. Like many of the Muslim countries I had visited in Central Asia, the ban on the consumption of alcohol is completely ignored. You have to blame the Russian influence for their fondness for vodka.

Next morning, with only a slightly blurry head, I prepared for the third time to ride to Mary. Yes, I had to ride 50km back to that notorious roundabout but at least this time I knew were I was going. The narrow road on the right that looked like a laneway  was in fact the highway to Mary. There would be no mistakes this time.

I gathered Bahar and some of her family for one last photo and thanked them all for their overwhelming hospitality. I now had an answer to my question. The ordinary people of Turkmenistan had nothing in common with their demented government.

But it remained to be seen what the rest of my time in Turkmenistan would hold in store for me. 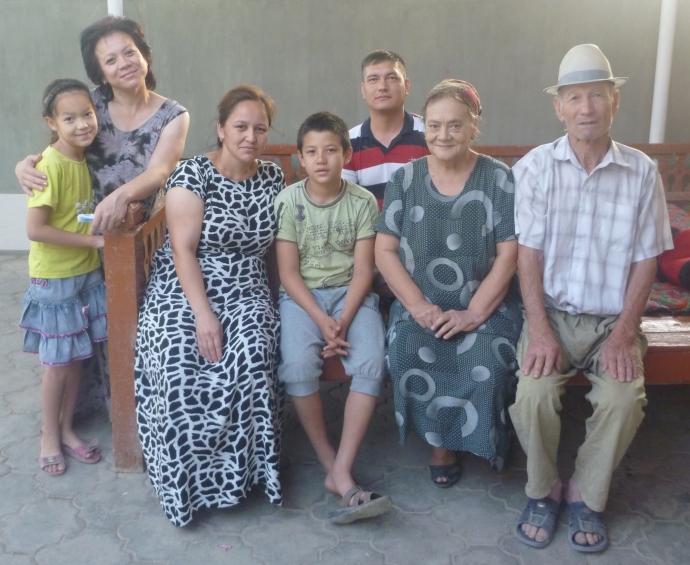 Some of Bahar’s family. They turned what was shaping up to be a pretty ordinary day into a day of celebration. Left to right: Bahar and her younger daughter, Enejan; sister-in-law Gulyabek; Eziz; brother Hemra; Rosygul and Baba Allamurat.