Mary and the Hotel Yrsgal

Posted on October 7, 2012 by briansworldtour

I made a relatively early getaway from Sayat as I had to ride the 50km back to Turkmenabad and refuel. And I was determined to cover as much distance in the cool of the morning before the mercury headed for 40 degrees again. Back in Turkmenabad, for the third time in two days, I refilled the tank at a different petrol station this time, not wanting a repeat of yesterday’s calamity. I was greeted by a young girl dressed in a smart company uniform.

As she filled the tank she asked me, in very broken English, the usual questions: where I was from, where I had been and where I was going. In situations like this the map of the world on my pannier was worth its weight in gold. I could point to Australia, wherever I was at the time and my finishing point. However, I usually said London, not Dublin as most people had never heard of Dublin.

The young girl was able to hold a conversation and fill the tank at the same time without spilling a drop – both of which were well outside “the skill set” of yesterday’s dropkick. For the same reason, I suppose, why adolescent boys shouldn’t work on the checkout at Coles or Woolies!

After my pleasant little interlude with the pleasant young girl, I steeled myself for what lay ahead of me – 250km of nothing! 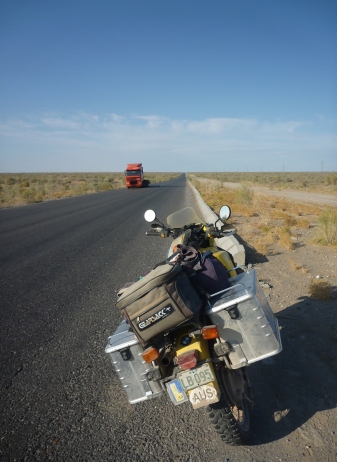 It could be anywhere in outback Australaia – except I’m riding on the right hand side of the road!

Anybody that has travelled in Central Australia would feel like they were back home on the road across the Karakum Desert to Mary (pronounced mah-REE, just like the one on the Birdsville Track). Kilometre after kilometre of dead straight road, endless big blue skies, the ruled-line horizon and the occasional road train.  The vegetation consisted of the same low saltbush scrub struggling to survive in the shifting sands.

There are no towns worth mentioning between Turkmenabad and Mary – just a series of flyspecks dotted along the way. It reminded me very much of crossing the Nullabor Plain.

Even with plenty of pitstops it was tedious going. While the road was bitumen it was in very bad condition with huge undulations – sometimes half a metre high from top to bottom – running for hundreds of metres along its length caused by the heavy trucks crisscrossing from Turkey and Iran to destinations further  east and back again.  I stuggled to average 80km/h as the bike wallowed through the waves of tarmac . 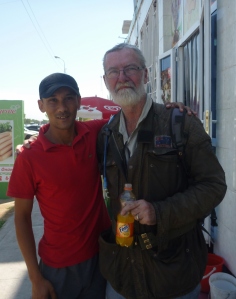 Another friendly local happy to help out a slightly frazzled traveller.

With all the stops to break the boredom it took me well over three hours to cover the 250km to Mary and I arrived just after midday. This left me with plenty of time to get lost while trying to find my hotel, the awkwardly-named Yrsgal Hotel. I missed the turn-off to the city centre and found myself backtracking through the streets of Mary. In the midday heat I stopped at a corner store for a cold drink and to ask directions. The friendly shopkeeper gave me a Fanta but wouldn’t accept any money for it – which was not surprising given the generosity of the everyday Turkmen people I had met. But I was pleasantly surprised when he told me the Yrsgal Hotel was just around the corner about 500m away!

The Yrsgal Hotel. What would it be?  A repeat of the incompetence and indifference of the Hotel Jeyhun in Turkmenbad or would it be warm and welcoming like the Turkmen people.

Yes, it was warm and welcoming!

Nah, just gammin! It was just like the Jeyhun, only worse! Even checking into the hotel seemed like too much trouble for the three staff on the desk. All had their eyes glued to the television watching the Turkmen equivalent of Days of Our Lives. Eventually when an ad break came on one of the staff tore herself away from the television and her nail polish to let me have a room.

Here we go again, I sighed to myself.

The list of hospitality transgressions is simply too long to recount, but the Hotel Yrsgal was now right up there with Hotel Khatlon in Kulyob as favourite to take out the Basil Fawlty Award for Spectacularly Atrocious Hospitality, Service and Facilities.  But at least the hot water worked!

With absolutely no reason to hang around next morning, I was up at sparrow’s fart for the 7am breakfast starting time. Unfortunately nobody else was! Eventually about 7:30am the staff decided to open the doors. Breakfast consisted of an egg and some sauasges that looked and tasted like the plastic display variety. Thankfully the coffee was quite good because I needed lots of it.

Checking out was again a drama for the prima donna on duty. She couldn’t print a receipt! And, besides,  she might break one of her hideously decorated and ridiculously long false nails that she had spent so much time on yesterday – before I rudely interrupted her. After a second, and then a third person, had been called the mystery of the reluctant printer was solved. It wasn’t turned on!

I was now into my fourth day of my 5-day transit visa. I could stay another day but it was never going to happen. I would head for the Iran border as quickly as possile. No matter what Iran was like it had to be better than this.

If ever there was a case of the lunatics running the asylum, then Turkmenistan was it.