Posted on November 1, 2012 by briansworldtour

I had been in Mashhad for 4 days now and, in my travels so far, I had found that 3-4 days was about the right length of time to spend in one place if I wanted to have a decent break without feeling like I was getting bogged down again.

But I was starting to get itchy feet and the time had come to get back on the bike.

The question was – in which direction? For the first time in my trip I now had a choice of routes to take. Apart from the road east to Turkmenistan, there were three major roads leaving Mashhad open to me.

The first option was due west on the main highway via Sabzevar directly to Tehran. This route skirted across the top of the Dast-e Kavir desert and while it was the quickest route to the west it was also the most boring. I had considered this route originally but, with the exception of the ancient city of Nishapur (the birthplace of Omar Khayyam), it did not have much else going for it.

The second option was south-west across the deserts of central Iran, the Dasht-e Kavir and Dasht-e Lut, to Yazd and then on to Esfahan. This had been my original intention as Esfahan is one of the most important historical cities in Iran. However the thought of travelling almost 1000km to Yazd across the dry, flat desert plateau in the height of summer was not very appealling. It would take me at least 2-3 days and there was not much of interest in between. Desert crossings in 35-40° heat had lost all the appeal they had once held for me.

The third option was north-west to the Caspian Sea via Bognurd and Gorgan. For some reason I had never really considered this route. I had spoken to quite a few fellow travellers about the Caspian Sea route. It seemed to have polarised people’s opinion – they either loved it or hated it!

My mind was made up. I would scrap my plan to visit Esfahan and head to the relative cool of the Caspian Sea to see for myself.

It was a decision that I would come to regret. 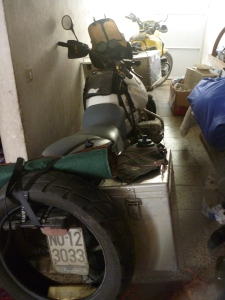 Sleeping with the bikes – the crowded basement of Vali’s.

My last day in Mashhad was taken up with an assortment of administrivia – changing some more US dollars for rials, some minor maintenance on the bike and catching up on emails. Simon, the friendly Irishman, had already left but before he did he arranged a VPN for me that allowed me to access all the social media and blogging sites that are completely blocked in Iran.

In his place an Italian motorcyclist on a well-used R1100GS had turned up at Vali’s. Marco, like every other traveller I had met, was heading east.  He was trying to catch up with some fellow motorcyclists before the group entered China. Was I really the only one heading west? Before I left Australia I had assumed that I would meet up with other overlanders travelling the same way.  But I had been travelling now for over 3 months and had not met a single motorcyclist travelling in the same direction.

Marco and I wasted most of the day swapping stories and exchanging useful information about our travels. He was just beginning his trip across Central Asia to China whereas I was almost at the end of my trip across Asia.

As Bognurd was only about 250km away I decided to leave in the mid/late afternoon to avoid travelling in the heat of the day. So about 3:30pm I bid adieu to the idiosyncratic Vali and his improbable Non-Smoking Homestay/Used Carpet Emporium and headed for the open road.

On the road north, just outside Mashhad is the small town of Tus – the home of the famous Persian poet Ferdowsi. Ferdowsi wrote the Persian epic Shahnameh or the “The Book of Kings”. Ferdowsi is to Persian literature what Shakespeare is to English literature.

The road was mainly 4- or 6-lane highway and the kilometres passed easily under the wheels. After so long in Central Asia I had forgotten what it was like to be able to ride safely  and comfortably at 100-110km/h for a couple of hours on end.

The Negin Hotel. Ya gotta love the retro 60’s furniture!

Before long Bognurd appeared on the horizon and, for a change, the hotel I was looking for was easy to find – right on the highway at the first intersection. The Negin Hotel was a pretty modern but soulless place that seemed populated by midweek business men.

But I didn’t care. I hadn’t slept in a decent bed for quite a while and after almost 3 hours of dodging the psychopaths driving on the highway I just wanted a room with a hot shower and a comfortable bed. After a very generous and relatively inexpensive meal in the hotel dining room I retired to the luxury of my first real hot shower in a long, long time. The bed was like heaven and I swear I was asleep before my head touched the pillow.

Tomorrow I would be in Gorgan – just a few kilometres from the Caspian Sea. I hadn’t seen the sea since leaving Australia 3 months ago and I didn’t realise how much I had missed it.