Posted on August 5, 2012 by briansworldtour 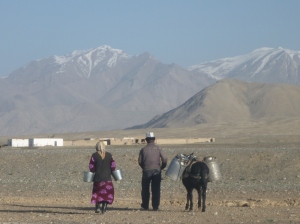 I woke early to pack the bike and witnessed the centuries-old daily ritual of collecting water from the local well using a donkey. Most of the people in this part of the Pamirs are ethnically Kyrgyz not Tajik and their simple lifestyle doesn’t appear to have changed for centuries. How they survive under such harsh conditions is truly amazing.

The start to the day was cool but with crystal clear blue skies – a vast improvement over yesterday’s Arctic winds. I wasn’t the slightest bit hungry but I knew I should eat something, anything, to combat the effects of the gruel from last night. To my horror, the leftovers from the previous night were served up again for breakfast. The goat’s milk had been left on the stove overnight and globules of fat and oil were floating on the top. I drank as much of it as I could stomach before excusing myself from the table. I felt sure I would pay for my good manners later in the day.

After breakfast, I finished packing the bike under the silent gaze of the homestay’s owner. He seemed intrigued by my now well-practiced routine. The owner spoke no English and despite my many attempts I could never get my tongue around his name. By 8am I was on the move again. The 20km to the turn-off to the Wakhan Valley was reasonable bitumen if you call 1970’s Palmerston Highway bitumen “reasonable”. Harry and Linda had warned me that the road deteriorated badly after the turn-off and there weren’t exaggerating.

Within 5 km the road turned into rubble and sand. And I still had 100km to go. It was back to a 1st gear crawl for most of it. Sometimes I even managed to get into 2ndgear. About 15-20km after the turn-off the rancid goat’s milk had its inevitable after-effect. I brought the bike to a sudden stop and, in the absence of anything resembling a tree, searched for a likely looking rock a discreet distance off the road.

You can never find a tree when you need one!

Having regained control of my digestive system, I felt remarkably better. No doubt the warmer weather contributed to my better frame of mind as well. The road up to the Khargush Pass (4350m) was the usual “jeep track” but not too bad – maybe I had become accustomed to bad dirt roads. I dropped down into the Pamir River valley and finally arrived at the non-existent police checkpoint at Khargush. For the first time I was able to look over the river to Afghanistan. 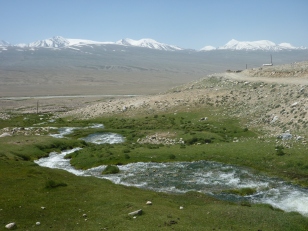 Looking down to the Pamir River valley, over to Afghanistan and the magnificent Wakhan Range

It was now only 70km to go to Langar. The road hugged the northern side of the valley as the Pamir River continued its journey west until it eventually joined the Wakhan River to form the much larger Pyanj River not far from Langar. Since crossing the Khargush Pass the weather had changed completely. It was now the middle of the day and was starting to get uncomfortably hot. I removed as many layers of clothes as I could and the water breaks became more frequent. The landscape was incredible and I stopped far too many times to take photos.

One of the “smaller” side valleys on the way to Langar.

One thing that didn’t change was the condition of the road. It was still a battle to stay in 2nd gear. About 25km out from Langar the road was forced to take a 10km detour up a smaller side valley. Even here the scenery was awesome (in the true sense of the word).

Eventually I arrived above the little village of Langar. Yes, above Langar – I could see it clearly below me. What I couldn’t see was how to get down to it. A complete section of the road (about 20-30m) had gone AWOL. After a few minutes of scanning the rocky ground I found some evidence of tyre tracks and followed them around to the other side of the offending obstacle where the road then plummeted about 2-3km down the side of the valley wall through a series of very steep and very sharp hairpin bends all of which had a lovely collection of 2-3 inch river gravel at the apex providing perfect traps for the unwary.

Safely at the bottom I began the search for the only homestay in Langar, Ëdgar’s, with the help of a mud map Erali had given to me in Murghab. I quickly found the right goat track/creekbed but there was still no sign of the homestay. Just when I thought I had gone too far and was about to turn back I came to one last white-washed, mud-brick building. Yes, there was still no sign but it was Ëdgar’s homestay.

Ëdgar’s Homestay – the mountains in the background are in Afghanistan.

Ëdgar (pronounced Yodgor) was very hospitable and immediately offered me some chai, naan and lollies – the standard fare in many parts of Central Asia. I readily accepted his offer and was happy to see that there was no grey sludge included. I settled into my room, and after discovering the bathroom had a real bath, I took the opportunity to soak away the travails of the day in some almost-hot water. I had in fact covered only 130km in the day – pathetic really by most normal standards. But when I considered the state of my intestines when I started the day, my unscheduled and urgent “pitstop” and the constant challenge of the road, I felt rather pleased with my meagre achievements. But the real highlight was to have finally reached the Wakhan Valley.

Tomorrow I would follow the Wakhan Highway all the way from Langar to Ishkashim (about 110km). For the entire length of the road Afghanistan would be only an arm’s length away on the other side of the Pyanj River – all the while the towering Hindu Kush mountain range providing a spectacular backdrop.